It is great to see small, independent records labels pressing new vinyl for so many underground rock acts. One such label is Wee Rock Records out in Springfield, MO and they recently released a couple of new items. There is the new full-length album from The Gardenheads entitled "Growing Season" and also the new 7", self-titled album from Clawhammer. 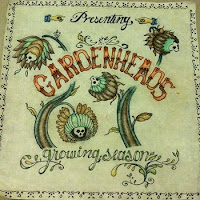 The Gardenheads are full of rock energy with that raw, garage rock sound as heard on "We Are F'd Up Kids." They also show a maturity in their sound with the contagious groove of "The Dishwashers Union" and on the expanding sound of "Adderall." The second side starts off with the quick, punk-like "Greenhouse Soiree," before closing with the fifteen-minute epic "Silent Spring." The Gardenheads take some risks with their music as they bring you on a journey with the song's lyrics and music.

The new album, "Growing Season" was released exclusively on vinyl at the end of June and it is the record label's 87th release of their extensive catalog. The Gardenheads have one show lined up at the moment in their home state of Missouri. To find out more from this indie-rock band, please visit the band's Facebook page at www.facebook.com/thegardenheads.

Clawhammer have been making music together for the last couple years and have finally released their new self-titled 7" album. The songs "I Think I Heard A Sound" and "Hell" show off the band's knack for combining classic instruments like banjos and acoustics with some of today's electronics to create a truly unique sound that brings the old-fashion sound of yesterday into today's music world.

Clawhammer's newest release came out in February of this year. Look for the band's next release to come soon. For more information on the band, please visit www.facebook.com/pages/Clawhammer/150015881747210 and to find out about other releases from Wee Rock Records, check out weerockrecords.com.
Posted by JP's Music Blog