CD Review: Up The Chain Sows The "Seeds" Of A New Album 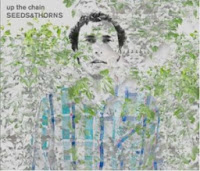 From Philadelphia comes the latest release from folk artist Reed Kendall with his second album as the leader of Up The Chain. The new album "Seeds & Thorns" was released October 15 and features production by Bill Moriarty (Dr. Dog). The album is already making noise in his home town and earned Up The Chain an opening slot on 10,000 Maniacs' FAF festival show.
The music on this new release is very relaxing as you just get lost in Kendall's vocals in "Same Story." He adds a bit of soul music to his sound in "Take Me Talking" and "For To Give Away" as his approach mirrors the seventies output of Paul Simon. Up The Chain could be ranked with fellow singer/songwriters Amos Lee and Shawn Mullins with outstanding songs like "A Ground" and "No Sweeter Sound." The album closes with the storied lyrics of "Names of Ghosts" as you will instantly put the album on repeat to enjoy his songs once again.
Up The Chain has been on the road since the beginning of October, but still has dates scheduled until mid-November, including a performance at Daytrotter Session on November 7. For more information on this new release from Up The Chain, please visit his Facebook page at www.facebook.com/UptheChain.
Posted by JP's Music Blog


I very rarely see such kind of interesting and informative post about new videos..Thanks indeed for sharing I was searching similar type of information.Its quite informative and i have learn so many new things her