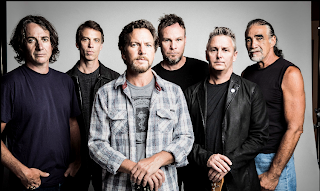 It was three years ago that the fab five of Pearl Jam took over downtown Hartford as fans swarmed to the XL Center to see one of their favorite bands. Now, with a new album and a new sense of purpose, Pearl Jam once again called Hartford their home, if only for one night.
The XL Center arena filled to capacity in no time, with the area in front of the stage designated to a General Admission, standing room only audience. The lights went out at precisely 8:30, signaling the start of a three hour performance by one of the premier rock bands of all time, Pearl Jam.
Lead singer Eddie Vedder walked to the front of the stage with his trusty notebook and a bottle of wine in hand to begin the night with the mellow tones of "Pendulum" and "Long Road." The tempo began to pick up with the addition of new songs "Lightning Bolt" and the punk-like fury of "Mind Your Manners." From that point on, Pearl Jam could do no wrong in the eyes of their fans. Songs like "Last Exit" and "Even Flow" had the audience bouncing and singing along to every word. Their newest single, "Sirens" lowered the excitement for only a moment, before picking things back up with "Unknown Thought" and "Do The Evolution." The first set closed with an extended jam of "Better Man," in which the audience sang the beginning verses to the band.
After a short break, Pearl Jam returned to the stage for the sit down/acoustic part of the show, beginning with "Yellow Moon." One of the songs, not on the original set list (according to Vedder), was the rare gem "Come Back" from the band's 2006 self-titled album. After a short explanation of new song "Future Days," the band proceeded with a couple of cover songs, including the fan-favorite "Chloe Dancer/Crown Of Thorns" and a repeat cover from their 2010 appearance, Van Halen's "Ain't Talkin' 'Bout Love." The band turned the audience into a wave of people with "Given To Fly," before mellowing the mood with Vedder inspiring many with his words on gun control and the Newtown tragedy that took place last year. A fun, energetic version of "Porch" found Vedder swinging from the lights as guitarists Mike McCready and Stone Gossard locked into their solos.
After another quick break, Pearl Jam returned to perform "Elderly Woman Behind The Counter In a Small Town," for the audience in the back the stage. Keyboardist Boom Gaspar got into the act with an amazing solo on "Crazy Mary," before the band decided to flip the house lights on during the adrenaline fueled "Go." The evening ended with the audience singing along to "Alive" and "Indifference."
At just before midnight, Pearl Jam stood arm in arm at center stage to a roaring applause. The overwhelming response showed the band how appreciated their fans are that they continue to be one of the best live bands in music today.
First Set: Pendulum, Long Road, Sometimes, Corduroy, Lighting Bolt, Mind Your Manners, Last Exit, Immortality, Even Flow, Sirens, Alone, Unknown Thought, Records Play, Save You, Do The Evolution, Better Man
Second Set: Yellow Moon, Come Back, Future Days, Chloe Dancer/Crown Of Thorns, Eruption/Ain't Talkin' 'Bout Love, Given To Fly, Got Some, Wasted Reprise/Life Wasted, Porch
Encore: Elderly Woman Behind The Counter In A Small Town, Crazy Mary, Go, Alive, Fuckin' Up, Indifference
Posted by JP's Music Blog

This sounds like it was an epic concert! I would love to see them sometime

I was there. Fantastic show. this band never disappoints.

I was there too - it was an INCREDIBLE show. I can't believe how energetic Eddie Vedder is!

I was there, front row, on the rail in GA. It took 16 years in the fan club to get that close, but that show proved it was well worth the wait. What a show. I will never forget it. (The two picks and Eddie's wine bottle as souveniers helps...!)

It sounds like it was a lot of fun! My son idolizes Eddie Vedder so I told him to save up and I would be willing to pay half for the concert ticket price.