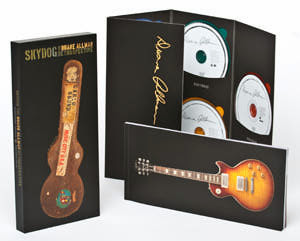 One of the most amazing, but sometimes forgotten guitarist to have ever picked up the instrument is Duane Allman. Known as the founding member of such classic bands as Derek And The Dominos and of course The Allman Brothers Band, Duane also worked along side such greats as Wilson Pickett, Ronnie Hawkins and Aretha Franklin. Back in March, Rounder Records released a retrospective, 7-disc box set entitled "Skydog." The set brought together 129 songs (33 of them never before released) that features the great guitar work of the late virtuoso Duane Allman.
The first two discs features a lot of Allman's side work and early bands like The Escorts and The Allman Joys. As a sideman in the late-sixties, Allman performed lead guitar on Clarence Carter's rendition of The Doors' "Light My Fire" and Wilson Pickett's take of The Beatles' "Hey Jude." Allman found a good working relationship along side King Curtis, turning his renditions of "Hey Joe" and "The Weight" into pure magic.
The third disc starts off with Duane's attempt as a solo artist in 1969. He turns "Goin' Down Slow" into a lost treasure, before moving on to perform along side the greats like Otis Rush and Boz Skaggs. Finally, about half way through the collection, we begin to get into Duane's more familiar territory with The Allman Brother Band.
By late 1969 and early 1970, Duane Allman is one of the most desired guitarists in the world as his band begins to find success. Disc four finds Allman alongside the great Ronnie Hawkins performing on the Bob Dylan classic "One More Night and Carl Perkins' "Matchbox." Duane lends his special talents to the recordings of Lulu, Johnny Jenkins and John Hammond before returning to the Allman Brothers Band's performance at the Fillmore east in 1970.
The real "meat and potatoes" of this box set comes on the last three discs that features some of Duane's greatest work. After being invited to record with Delany & Bonnie & Friends, he finds comfort working with fellow guitar great Eric Clapton in the supergroup Derek & The Dominoes.
One of the gems on disc six is when Duane sat in with the Grateful Dead at their 1971 performance at the Fillmore East as he performs lead guitar on the song "Sugar Magnolia." The set closes out with Duane once again joining a smaller version of Delany & Bonnie & Friends on their live appearance at A&R Studios in July 1971, then bringing his group the Allman Brothers Band there in August performing a twenty-minute version of "You Don't Love Me/Soul Serenade." After a couple more performances by the Allman Brothers Band live at State University, the set closes appropriately with the studio instrumental "Little Martha.
The initial limited-edition version sold out in a matter of weeks, but on November 5th Rounder Records is releasing the "Encore Edition" of Duane Allman's ultimate box set "Skydog." Along with seven discs filled to the brim with great music, the set also includes a 74-page, full color booklet with new liner notes by music writer and historian Scott Schinder and also from Duane's daughter Galadrielle Allman. To find out more about this set dedicated to one of the greats, please visit http://www.allmanbrothersband.com/modules.php?op=modload&name=News&file=article&sid=855.
Posted by JP's Music Blog