CD Review: Roosevelt Dime Come At You With A "Full Head Of Steam" 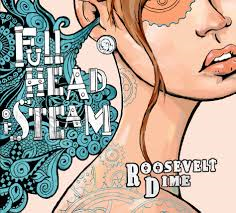 From Brooklyn, NY comes Dixieland jazz band Roosevelt Dime presents one of the first breakthrough independent albums of 2014 with "Full Head Of Steam." Their sound combines that classic New Orleans sound with a modern folk/Americana feel. The new album will be released digitally on January 14th and physical copy will become available on March 4th.

The dozen songs that make up the new release, begins with the fun, foot-stomping pop-folk of "Oh To Be," which features the Punch Brothers' Chris "Critter" Eldridge on guitar. The female lead vocals of Molly Venter along with Red Molly mixes things up on "Down On Your Luck," before reaching a fuller folk/rock sound on "Calvary." The band gets loose on "I Want Mo!" and gets down and dirty with the horn-filled, R&B flavor of "Now There's You." Roosevelt Dime put their stamp on the traditional "St. James Infirmary" and add an up-tempo, party spin to "Deep Elem Blues." The album closes with the band's title-song "Roosevelt Dime" as they finish with a chorus that makes sure you remember the band's name.

They will be appearing in Putnam, CT on January 24 and Westport, CT on January 25 to start out the new year. To find out more about this fun, new and exciting album from Roosevelt Dime, please visit rooseveltdimemusic.com. 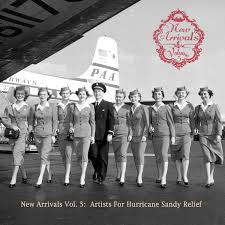 Also just released in physical form at the beginning of the new year is the 20-song compilation "New Arrivals, Vol. 5: Artists For Hurricane Sandy Relief." It was released digitally in October for the one year anniversary of the super storm that damaged the northern east coast. Appearing on this album are rising artists as well as some established ones that just wanted to be a part of this benefit album. New songs from Paula Cole, Antigone Rising, Rachel Sage and the U.K.'s Polly Paulusma, join rising artists Ari Hest, Lucy Wainwright Roche and A Fragile Tomorrow on this exciting benefit album. 100% of the proceeds of this compilation go towards the following charitable organizations: The Red Hook Initiative, Project Hospitality Staten Island Hurricane Relief Fund and Greybeards.