CD Review: The "Death" Of My Chemical Romance Gathers Hits Together 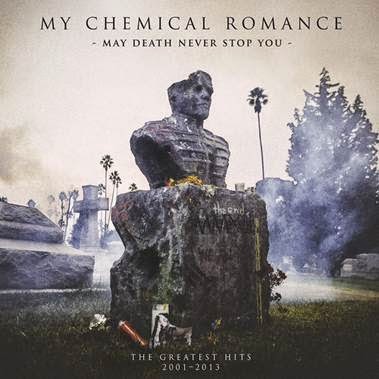 New from Reprise Records is the career spanning set entitled "May Death Never Stop You" from My Chemical Romance. After the announcement of the band's break-up in March of last year, the record label has been working on a "greatest hits" collection with input from the band members. The nineteen-song album includes the huge hits "Welcome To The Black Parade" and "Na Na Na (Na Na Na Na Na Na Na Na Na)," along with a few demos and a brand new song, "Fake Your Death."


Beginning with the newly released "Fake Your Death," the band's sound still has relevance in today's alternative rock market as they work their punk like edge into this mainstream pop gem. My Chemical Romance are not known as a punk band, but the early days of "You Know What They Do To Guys Like Us In Prison," shows that they could be as energetic and wreckless the likes of Green Day. On the flipside, they lay their hearts out on the line for the piano ballad "Cancer." The three demos added to this compilation are raw, but show a less polished sound that should have been shown more air time on their albums.


There is also a deluxe version of this release that features two hours of never before seen music videos on DVD. Collectors will also appreciate the release of 180-gram vinyl two-LP set. To find out more, please visit mychemicalromance.com.
Posted by JP's Music Blog