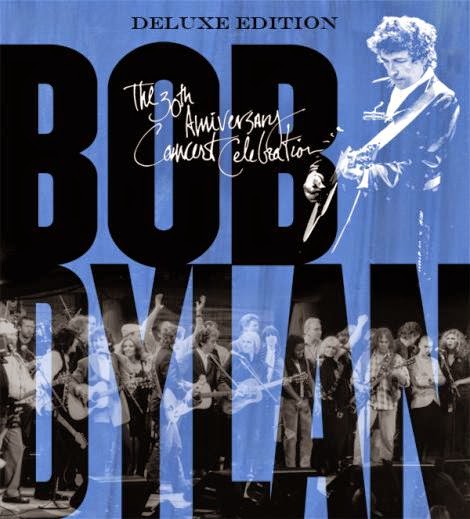 For one night back in 1992 some of the biggest talented musicians of all-time gathered at New York's Madison Square Garden to pay tribute to the one and only Bob Dylan. The concert celebrated the "30th Anniversary" of Bob Dylan's debut into the music industry. In 1993, Columbia Records released a video and a live album from the top performances from that evening and the album went gold, selling over 500,000 copies. Now after twenty years have passed since that original release and the format that the concert was released on became outdated and was definitely overdue for an upgrade. So, on March 4th, Columbia Records and Legacy Recording released a new High Definition video of the concert on DVD and on Blu-ray. Also, the audio was remastered for a newly released 2CD set, all with bonus material not included on the original release.

The 2DVD and Blu-ray sets include a stunning visual documentary of that evening that has never looked, or sounded better. Other than the aged clothing and hairstyles, you would have thought that this concert happened only last year, that's how good it looks. Along with the original 220 minute concert, is 40 minutes of bonus "Behind The Scenes" features as well as three brand-new, never before released performances. Fans will love viewing the rehearsal footage and hearing all the interviews with some of the performers and how Bob Dylan's music influenced them. Some of the more memorable moments of the show is the acoustic version of "Masters Of War" performed by Eddie Vedder and Mike McCready and Sinead O'Conner going off-script shouting the lyrics of "War" to a booing crowd only to be consoled by Kris Kristofferson.

The newly remastered 2-CD set sounds exceptional and includes two bonus songs not on the original release. While the audio set never contained the entire concert, Columbia Records did their best to choose the best songs to represent that evening's event. Included on this set, for the first time, are two rehearsals, one from Eric Clapton performing "Don't Think Twice, It's All Right" and the other from Sinead O'Conner's "I Believe In You." Both performances were significantly different from the live versions performed that evening. It is also great to hear many of the musicians that have passed on since this concert, in their prime like George Harrison, Johnny Cash, Lou Reed, Richie Havens and members of The Band and The Clancy Brothers.

This well-deserved upgrade reminds us how important Bob Dylan's music and song-writing was to the development of rock music and the politics of our nation. Bob Dylan was never shy about speaking or singing his mind and to hear all the great musicians pay tribute to him, shows that his music is timeless and is attractive to everyone in one form or another.