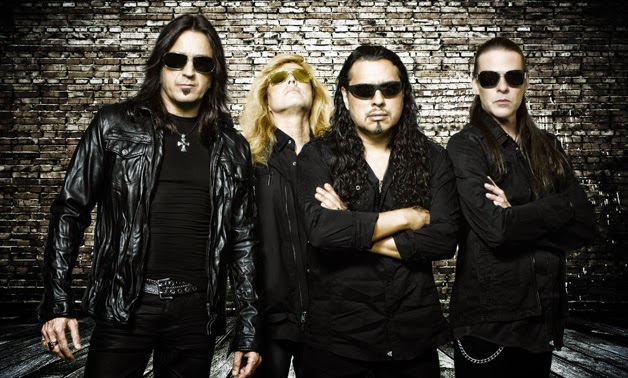 Christian metal band Stryper is celebrating thirty years together as a band and they began their U.S. tour Friday night at the Wolf Den at Mohegan Sun. The band was not accepted in the mainstream right away as their songs spoke of worship and reflection of Christianity, that was until their 1986 break-through album "To Hell With The Devil." That album spawned the hits "Calling On You," "Free" and "Honestly" and earned platinum status selling over one million copies, with the help of their music videos on MTV. After disappearing for most of the 1990's, Stryper returned in 2005 with a new album ("Reborn") and a new sense of purpose to spread the word through rock music.

The show at the Wolf Den was a "make-up" show that the band was supposed to perform back in January, but was cancelled then due to a snow storm. Now, with no storms stopping them, Stryper fans filed into the small, club-like area in the middle of the casino to relive their youth.

The Stryper boys came out blazing, beginning with two songs off their newly released album "No More Hell To Pay." The band quickly gave the fans what they came to see as they dove back into their catalog for the 1984 single "Loud 'N' Clear," followed by "Reach Out." Lead singer/guitarist Michael Sweet was mostly known for his exceptional singing voice as he can still hit the high falsettos when the songs like "Free" and "Rock That Makes Me Roll" called for it.

After being label a "hair metal" band, Stryper set out to prove critics wrong as they were a pure hard rock band and that they could play as heavy as any metal band. A couple of the lesser known songs that evening proved that point, beginning with the heavy drumming of "Marching Into Battle" and "All For One," from their lesser known "Against The Law" album. At many rock concerts, most of the time the guitarists will toss guitar picks into the audience, well not only was their guitar picks flying, but Michael Sweet, along with drummer Robert Sweet, would also toss out miniature bibles into the crowd.

Stryper snuck in a cover of newly Rock N Roll Hall of Fame inductees' Kiss with "Shout It Out Loud," which threw off many in the audience, not knowing it wasn't one of their own songs. Lead guitarist Oz Fox ripped through an electrifying solo in "The Way," and the band finished their set with the fan favorite "To Hell With The Devil," before leaving the stage.

The encore began with the rarely played "Sing Along Song," which was requested by a slightly annoying fan who was shouting for them to play it the entire night. Michael Sweet took control of the microphone, (and the audience) closing with the MTV hit single "Always There For You" and the early day rocker "Soldiers Under Command."

While the band may have been known for their yellow and black wardrobe and "hair metal" rock preaching, Stryper have continued to be a force in the rock community. The amount of energy they put into their live shows and their classic metal sound is something that their fans can be proud to have been a part of.

Setlist: Legacy, No More Hell To Pay, Loud 'N' Clear, Reach Out, Calling On You, Free, More Than A Man, Marching Into Battle, The Rock That Makes Me Roll, Shout It Out Loud, All For One, The Way, To Hell With The Devil
Encore: Sing Along Song, Always There For You, Soldiers Under Command
Posted by JP's Music Blog

Welcome brothers and sisters in Christ
I need yours help, I am powerless
but maybe together we can do it.

full of hatred, blasphemy and paganism
Inform your friends, let everyone who can report this blog,please.I beg you, do not be indifferent