CD Review: KISS Crank Up The "Decibels" With An Overhaul Of New Releases 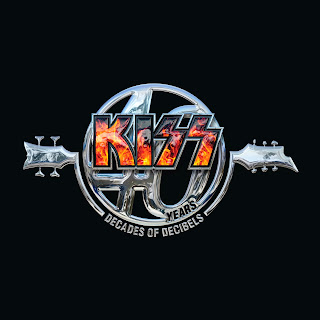 Back in 1974, four guys got together with a purpose of being the loudest, weirdest, most rocking band on the planet. They would do anything for their fans, like wear make-up, breathe fire, spit blood, smash guitars. Their outfits are still outrages by today's standards and they have one of the most common band names in history. I'm talking about KISS! The band is celebrating their 40th anniversary in a big way.

They were finally inducted into the Rock And Roll Hall of Fame, they made the cover of "Rolling Stone" magazine for the first time in their careers and they are blowing out the biggest vinyl release in history. Beginning back in April, Kiss rolled out the first batch of KISS vinyl with ten newly remastered albums pressed on 180-gram heavyweight vinyl. The next batch of vinyl will be released on May 27th. It includes some albums that have never been released on vinyl before, including "Alive: The Millennium Concert" and "Carnival of Souls: The Final Sessions." Also arriving on May 27th is their first career spanning greatest hits set that includes one song from each one of their albums, plus three newly released live songs and a previously unreleased demo. The forty song greatest hits release entitled "KISS 40" mixes together many well-known hits with selections that long-time fans and collectors will also find interesting. The two demos are the highlights of the first disc. The Paul Stanley vocals of "God Of Thunder (demo)" show a pop direction for the song, and is a questionable addition to this collection with so many other great outtakes that could have been included. The other demo is for the unreleased song "Reputation," which has Gene Simmons and the band still feeling their way through the song. The chorus seems simple and repetitive, but the song shows great insight in developing these classics. The second disc of the set includes eight live songs alongside 10 studio hits from the band's last eight studio albums. Some of these live songs are making their official debut on this release, including "Deuce" (from 2004), "Cold Gin" (from 2009) and "Crazy, Crazy Nights" (from 2010). The exceptional thing about this release is that it plays through chronologically, but is a little erratic mixing together demos with hits and live songs as the Universal Music Group try to please every level of KISS fan. 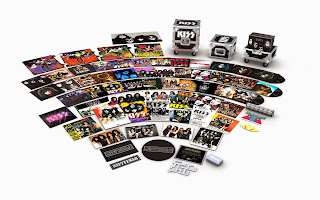 The major release comes in the form of "The Ultimate Vinyl Road Case." It houses all 19 studio albums, the 5 officially released live albums, the 4 original solo albums and 6 exclusive titles that will only be available in this set. Each of these albums was newly remastered and pressed on 180-gram vinyl. Extras in the set include eleven 11”x17” archival posters, including the band’s very first promo poster; a KISS vinyl cleaning cloth; a KISS turntable mat; a set of KISS dominoes; four band lithographs highlighting four decades of the band; and a certificate of authenticity displaying the limited edition number for each of the individual box sets. To find out more about this insane new release, please visit myplaydirect.com/kiss.

KISS is also touring this summer with fellow rockers Def Leppard. The tour begins on June 3rd and runs to the end of August. For a complete list of dates and for more information on these new releases, please visit kissonline.com/news/title/40th.
Posted by JP's Music Blog