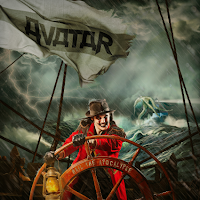 Swedish metal band Avatar recently released their fifth studio album entitled "Hail The Apocalypse." After reaching #25 on the album charts in their home country of Sweden with their last album "Black Waltz," Avatar are looking to continue building upon that success, lead by the Alice Cooper-like appearance of Johannes Michael Gustaf Eckerstrom. The eleven-track album is an explosion in music that metal fans were waiting to happen. The energy and aggressiveness of the opener "Hail The Apocalypse" has a great, deep metal rhythm that is irresistible.  The music of "What I Don't Know" just pounds your brain as they look to hit the mainstream with the album's first single, the tempo changes of "Bloody Angel." The band are on fire with the dual guitar attack of "Vultures Fly" and Eckerstrom's screams during "Murderer" put you right in the middle of the song's disturbing action. They show us a different side to their music with the carnival feel of "Puppet Show," before closing with a reved-up cover of Nirvana's "Something In The Way" and the slow six-minute build-up to the "Tower."

Avatar are currently on tour in the U.S. until June 1st, before heading over to Europe. For a complete list of dates and for more information on the new album "Hail The Apocalypse," please visit avatarmetal.com. 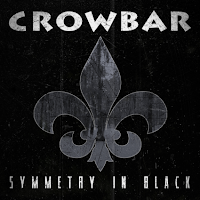 From the southern swamps of New Orleans comes the new album from Crowbar entitled "Symmetry In Black." With their tenth studio album, the band are at their creative peak with these dozen songs that easily prove that Crowbar are one of the premier underground metal bands. The heaviness of the opener "Walk With Knowledge Wisely" and the slugging doom metal of "Symmetry In White" showcase the roots of their music. The slow burn of "Reflection Of Deceit" and the fast paced hardcore sound of "Ageless Decay" display the diversity in their music, keeping them from being placed into a specific metal category. Crowbar continue the onslaught with the screams of "Shaman Of Belief" and the pounding of "Teach The Blind To See," before closing with the four-minute instrumental "The Piety Of Self-Loathing."


The new album will be released on May 27th through eOne Music. To find out more, please check out their Facebook page at www.facebook.com/crowbarmusic.
Posted by JP's Music Blog