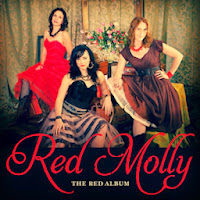 Acoustic folk trio Red Molly are celebrating their tenth anniversary with a new album and 40-date tour. The new album entitled "The Red Album" will be released on May 27th and should be considered one of the best new albums to discover in 2014. The thirteen-song release begins with the dark, clap-stomp beat of "Clinch River Blues" as you instantly notice how well their voices mesh together. They find their way to the country mainstream with "I'm Listening" and Red Molly should have you wrapped around their fingers with the gentle acoustic folk story of "Willow Tree." The trio turns "Homeward Bound" into a quiet plead to go back to what's familiar before treading again to the dark side with "When It's All Wrong." The fragile backdrop of "Sing to Me" continues to display the wonderful harmonizing between the band members. Their cover of Richard Thompson's "1952 Vincent Black Lighting" is a folk gem, before closing the album with the two-minute accapella "Copper Ponies."

Red Molly are currently on tour with their next stops in Scituate, MA and West Hartford, CT. They have U.S. dates scheduled all the way through to September before heading over to Europe, so do yourself a favor and catch these ladies live. To find out more about their new release, "The Red Album," please visit redmolly.com. 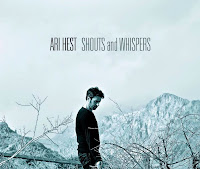 Singer/songwriter Ari Hest returns with his new album entitled "Shouts And Whispers." It will be released on June 8 through Project 4 Records and showcases two sides to Ari's song writing. The first half of the album shows Ari experimenting with soundscapes and beats that create an attractive pop appeal. The opener "Harvest" has a modern rock feel, while the follow-up "Here To Be Forgotten" has an amazing radio-friendly feel that allows Ari's voice to take off. The twenty second "Interlude" switches gears as the gentle acoustic folksiness of "Less" quiets things down. His talents shine on the simpler sounds of "Into The Empty White" and "Bona Fide," before closing with the piano-led "After The Thunder."

Ari Hest recently began his U.S., opening for Suzanne Vega, along the east coast before heading west at the end of the month. To find out more about his new album "Shouts And Whispers," please visit arihest.com.
Posted by JP's Music Blog