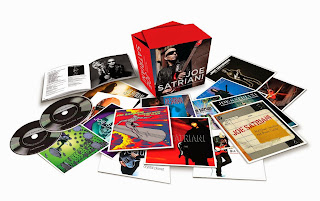 The name Joe Satriani is synonymous with the guitar. His recording career began almost three decades ago with his debut release "Not Of This Earth." His big break would come with his follow-up album "Surfing With The Alien," which established Satriani as one of the most exciting instrumental guitarists to have ever picked up the instrument. Now, fourteen albums later, Legacy Recordings is boxing up his albums for "The Complete Studio Recordings." It contains every one of his solo albums, remastered and also an extra disc of "Additional Creations and Bonus Tracks" that did not appear on any other album.

Trying to review this set is an insurmountable task since every song showcases a side of Satriani that needs to be heard to believe. From the classical acoustics of "Baroque" to the guitar frenzy of "Circles," Satriani gives us every emotion within his songs. His vocals also make a rare appearance on some of the songs, like the speed metal feel of "Can't Slow Down," the pop/rock of "I Believe," along with the fifties doo-wop of "The Phone Call." Some of the best moments is when Satriani experiments with his guitar alongside different rhythms as in the industrial metal feel of "Devil's Side," the funky beats of "Strange" and of course the jazziness of "Satch's Boogie." He has also worked with a number of great musicians like Doug Wimbish (Living Colour), Andy Fairweather Low, Anton Fig, Robert Fripp (King Crimson) and many others. The one special quality about his music is that it sounds timeless. You can mix together any of his songs from any album and they all sound like they belong together because of his playing and the musicians he surrounds himself with.

The "Joe Satriani: Complete Studio Recordings" was released on April 22nd in two formats. One format is the conventional 15 CD library box and the other is a limited edition USB drive sold exclusively through his website. The USB drive set has to be one of the cooling ideas ever, as the two USB drives that contain all his music are the sunglasses that are placed on a shiny silver statue of Satriani's head. All of the music was remastered for this release in the highest resolution possible. To find out more about this amazing new set, please visit satriani.com.
Posted by JP's Music Blog