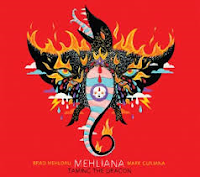 Jazz pianist Brad Mahldau has been a solid fixture for the last twenty years on the touring circuit mainly performing as a jazz trio. He has worked alongside such acclaimed artists as Joshua Redman, Matt Chamberlain and Wayne Shorter just to name a few. Then in 2013 Mehldau began touring with drummer Mark Guiliana as a synthesizer duo named Mehliana. Back on March 13th, Nonesuch Records released the duo's debut album "Taming The Dragon." This twelve-song release is filled to the brim with electronic soundscapes that explore your mind with its experimental sound. Beginning with the story of "Taming The Dragon," Mahliana are prepared to take you along for a journey with the funky, erratic beats of "You Can't Go Back Now" to the atmospheric synthesizer of "Elegy For Amelia E." featuring spoken word from a historic speech by Amelia Earhart. The two lock into a groove during "Hungry Ghost," which allows both Mahldau and Guiliana to showcase their skills. The album finishes with the spaced-out feel of "Swimming" and the smooth, mellow jazz of "London Glooming."

The duo will be heading over to tour Europe in July. For a complete list of live dates and to find out more about the debut album from this new jazz fusion band, please visit www.bradmehldau.com/mehliana/. 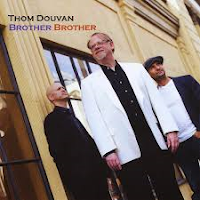 Next from California comes jazz guitarist Thom Douvan with his latest album "Brother Brother." The album is dedicated to the passing of The Funk Brothers Johnny Griffith and Richard "Pistol" Allen, to which he was bandmates with in '80s. The new release is filled to the brim with jazz covers of many famous funk and soul songs, beginning with The Isley Brothers' "Harvest For The World." Many of the songs on this album are instantly recognizable, even though Thom puts his spin on them turning many of these vocal hits into jazzy instrumentals. Thom and his backing band of seasoned musicians gives "Ain't Nobody" a shot of adrenaline with its peppy tempo and Thom's smooth guitar work. A couple of the most recognizable songs are sandwiched in the middle of the album, the organ-led "What's Going On," the slow blues of Hall & Oates "Sara Smile" and Stevie Wonder's "Isn't She Lovely" which has a more rock infused sound led by Thom exceptional guitar. The album finishes up with the amazing musicianship of the entire band in "The Water Is Wide," before closing with smoothness of the Alicia Keys' penned "If I Ain't Got You."

Thom Douvan and his band will be performing a CD release show on May 24 in Detroit, MI. To find out more about his latest release "Brother Brother," please visit thomdouvan.com.
Posted by JP's Music Blog