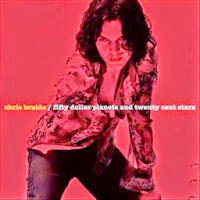 Award-winning singer, songwriter and producer Chris Braide returns with his third full-length solo album entitled "Fifty Dollar Planets And Twenty Cent Stars." After writing songs for Britney and Beyoncé, Braide thought that it was time to release this set of songs that he as been working on. Braide said that he "channeled my inner Marc Bolen (T. Rex)" for this album as he kicks things off with the raw, guitar driven title song. He showcases his talent for writing pop songs with the adult contemporary feel of "Fascinating," before switching gears for the electronic rock of "Beautiful." His best moments on this album are when Braide plugs in and rocks as in "It's Not Too Late" and "What's Going On In Your Head." He closes with the album's most interesting song, "Agent Wilde & The Speedway Dancers" as Braide tells the stories of Agent Wilde amongst a pop/dance backdrop. To find out more about Chris Braide's latest release "Fifty Dollar Planets And Twenty Cent Stars," please visit www.cherryred.co.uk. 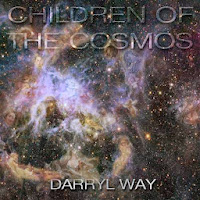 British violinist Darryl Way released his ninth solo album last month entitled "Children Of The Cosmos." It is Way's first progressive rock album in twenty years and it showcases his vocal skills as well as his incredible rock violin abilities. As a founding member of the British rock band Curved Air, Way wanted to give his long-time fans a reminder of the prog-rock movement that he help pioneer. The new twelve-song album begins with the title-song as the soaring keyboards and Way's vocals pave the way for a modern prog-rock masterpiece. Way's sound on "Nature's Way" could be a mainstream hit, while "Summer of Love" gives off a psychedelic vibe. Way incorporates some of his love of classical music with "Pachelbel's Canon" appearing in the song "Don't Look Back" and the amazing instrumental "Lagan Love," led by Way's outstanding violin. After the prog-rock trilogy of "A Winter's Tale," "A Modern Tale" and "An American Tale," the album closes with the gentle classical display of "Sergey." To find out more about Darryl Way and his new album "Children Of The Cosmos," please visit darrylway.com. 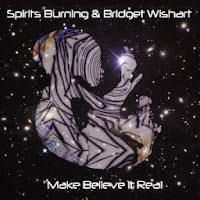 Space rock band Spirits Burning invited vocalist/flutist Bridget Wishart to return for her third outing with the band. Spirits Burning includes members of the seventies rock band Hawkwind experimenting with their jazz fusion side. Bridget Wishart is a British vocalist who had worked with Hawkwind on some of their late-eighties, early nineties albums. Now the two return after five years to create some truly unique music with their latest release "Make Believe It Real," which is the band's first double-CD. Disc 1 features 11 new compositions as their music looks to move you with the electronic beats of "Cyber Space" and the deep bass groove of "Skyline Signal." The band brings back some of the rock from the past on the heavy attack of "Demonkind," before showcasing the pure ambient feel of Spirits Burning's music with "Embers." The first disc closes with the fourteen-minute epic suite "Reflections" as they dig deep into their progressive rock past. The second disc features six songs (30 minutes) of music that was only previously available on compilations. Beginning with "Always (Spirited Away)" you get a sense of their rock roots as they explore a more modern progressive rock sound. Spirits Burning along with the vocals of Bridget Wishart explore the depths of space rock with the synth/rhythm battle of "Iceflow (Icetalk Mix)." The second disc finishes with the King Crimson-like rock orchestra epic "Chain Of Thought." to find out more about these amazing musicians, please visit spiritsburning.com. 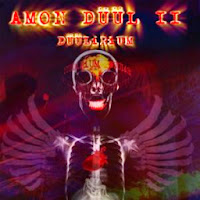 From Germany comes the experimental rock band Amon Duul II with their latest release "Duulirium." It was originally released back in 2010 and is the band's first studio album in 28 years. It is also the first album not to feature drummer Peter Leopold, who passed away in 2006. The new four-song album continues to showcase the band's experimental side, as they are easily compared to the early days of Frank Zappa and The Mothers. The songs easily push pass the eight-minute mark as the progressive rock sound of "On The Highway" take you on a storied journey. The highlight of the album is the 26-minute epic piece "Back To The Rules/Walking In The Park" as the band look to jam at every opportunity. To find out more about Amon Duul II, please visit amonduul.de/main.html.
Posted by JP's Music Blog