From the birth place of rockabilly comes the latest release from classic country rocker Jason D. Williams entitled "Hillbillies And Holy Rollers." The album was released on June 10, 2014, but could have very well been release on June 10, 1954. The album's rockabilly sound is due to Williams being possessed by the ghosts of legends passed who recorded at the legendary Sun Studios, which is were this album was also recorded. On this new release, Williams mixes a couple originals with classics by Johnny Cash and Hank Williams done in his special piano-fueled, Jerry Lee Lewis-style. Jason D. Williams turns "Folsom Prison Blues" into a light-hearted country hop and speeds up "Sweet Georgia Brown" to deliver a shot of punk-like energy straight to your soul. The highlight of the album is slow-duet of "You Win Again" between Williams and honky-tonk vixen Sarah Gayle Meech. The album closes with the gospel injected rockabilly of "I'll Fly Away" as you feel baptized by the fire of Williams' performance on the piano.

Jason D. Williams has live shows scheduled all the way through to November. Check out rockinjasondwilliams.com for a complete list of dates and for more information on his new album "Hillbillies And Holy Rollers." 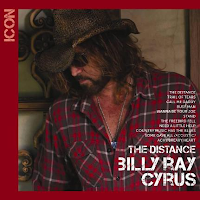 Now, with Miley Cyrus receiving all the attention these days, let's not forget about dear ol' dad. As part of the "ICON" series, Universal Music gathered together eleven of Billy Ray Cyrus's biggest country hits for "The Distance."  This new "greatest hits" collection became available on June 3rd and spans Cyrus' 22-year career. The set begins with the brand-new recording of "The Distance" as Cyrus explains is a "song is about going full circle in my life both personally and professionally." The other ten songs mix some lesser known duets and deep cuts with some of his more current hit singles like "Busy Man" and  "Some Gave It All." The incredible duets include "Stand" with his daughter Miley and the timeless feel of "Country Music Has The Blues," which was performed with the late George Jones and the lovely Loretta Lynn." The album ends where it all began with his first #1 single "Achy Breaky Heart." This compilation is a great addition to the 2011 "ICON" release from Billy Ray Cyrus, which is filled with all his highest charting singles.