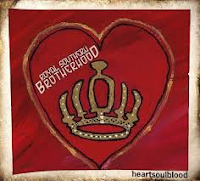 On June 10th, we got "Heartsoulblood," the second album from this royalty supergroup of blues rock, the Royal Southern Brotherhood.  For those that may not be familiar with the members of the band, let me introduce them to you. On guitar is Devon Allman, son of Gregg Allman and nephew to the late-great Duane Allman. Next is Cyril Neville, who is the fourth brother of the legendary Neville Brothers band and also featuring blues guitarist/singer Mike Zito along with drummer Yonrico Scott (Derek Trucks Band) and bassist Charlie Wooton.

The band received rave reviews with their 2012 self-titled debut album, which hit #5 on the Billboard Music Blues Album chart. Their new album "Heartsoulblood" debut at #6 on the Blues Album chart as the band look to hit the road in the U.S. with dates in July and August. The new twelve song release showcases each member's strengths as they all come together for the opener "World Blues." They pick up the pace for the adrenaline shot of "Rock And Roll" and add a little funk to their fury in "Here It Is." The dirty blues of "Ritual" is a great contradiction to the R&B/gospel feel of "Shoulda Known" and the Soul ballad "She's My Lady." The album closes with more roaring guitars for the sing-along song of "Love And Peace." To find out more about the Royal Southern Brotherhood, please visit royalsouthernbrotherhood.com. 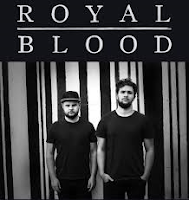 Newcomers Royal Blood recently released their first EP, "Out Of The Black" to introduce themselves to North America. This British duo has been making waves over the last couple years with their hit singles "Out Of The Black" and "Little Monsters." So, to help promote the band during the summer touring season, Warner Brothers Records gathered the bands early singles for this latest release. The thumping beat of the title song and the energetic hard rock appeal of "Little Monsters" shows a maturity this duo has even before the release of their full-length debut album. The only new song on this album is the big guitar sound of "Hole" as they indirectly pay tribute to The White Stripes and The Black Keys.

Royal Blood have a few festivals in Europe before hitting the U.S. in July. For a complete list of tour dates and for more information about the band, please visit royalbloodband.com.
Posted by JP's Music Blog