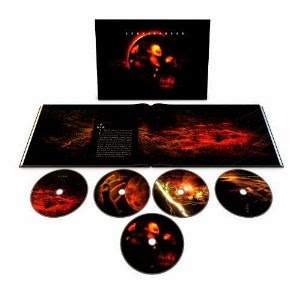 It's hard to imagine that it has been 20 years since Soundgarden released their blockbuster album "Superunknown." To celebrate, Universal Music/A&M Records will be re-releasing the album in three different formats on June 3rd. The album pushed Soundgarden and Seattle's grunge movement into the mainstream, exposing a more heavy metal aspect to their sound. The album hit #1 on the Billboard Album chart, garnished five "top 20" singles and has been certified 5x Platinum status by the American Recording Industry. The original album gets a much needed remaster as the new version of the album sounds less grungy and more hard rock/metal as the instruments are cleaner and Chris Cornell's voice just electrifies. While the differences may not be as noticeable in the hit singles that have been heard thousands of times before, songs like "Head Down" and "Fresh Tendrills" sound clean and renewed. The new release also adds the non-album track "She Likes Surprises," which gives a glimpse to their earlier days.


But, Soundgarden fans will be drooling over the "Deluxe" and "Super Deluxe" editions of the album. Beginning with the "Deluxe" version, the original album is joined by a second CD filled with demos, rehearsals and rare b-sides. The stripped down versions of their hits "Black Hole Sun" and "The Day I Tried To Live" shows the band's process in layering sounds as they are in different forms of completion. The really enjoyable tracks on the second disc are the hard-to-find b-sides, the punk-like appeal of "Kyle Petty, Son Of Richard" and the experimental "Jerry Garcia's Finger."


Die-hard fans will want to splurge for the "Super Deluxe" edition that contains 4CD/1 Blu-Ray. The four CDs consist of the original album, remastered, a CD of b-sides and live songs, a CD of just the demos and a CD of just the rehearsals. The entire "Super Deluxe" set consists of 54 songs and over four hours of music. The Blu-Ray contains the 5.1 Audio Mix of the album in the highest quality possible. Also included with the five discs is a hardbound book with new and original artwork and liner notes from David Fricke (Rolling Stone). The album will also be available in a double-LP gatefold pressed on 200-gram vinyl for all the record collectors out there.


Soundgarden, along with Universal Music and A&M Records have spared no expense paying proper homage to one of the greatest albums of the nineties rock era. To find out more about this amazing new release, please visit soundgardenworld.com.
Posted by JP's Music Blog