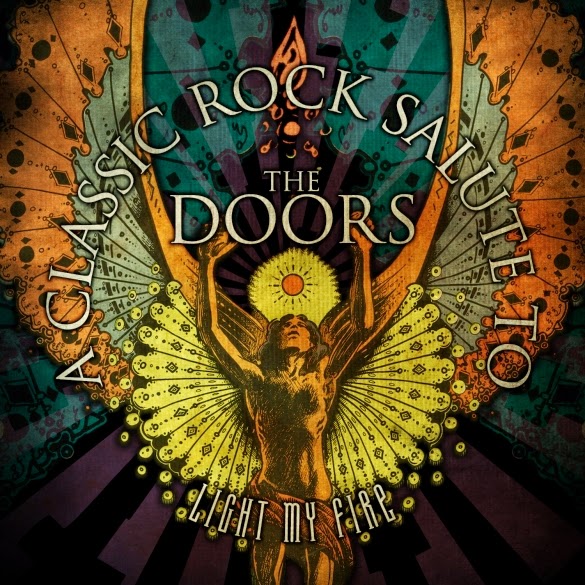 The latest tribute album for the psychedelic rock band The Doors entitled "Light My Fire - A Classic Rock Salute To The Doors" is very special. It contains one-of-a-kind interpretations of many of the classic music of The Doors that we have all grown to love. Hopping on board for this tribute album are members of Yes, Deep Purple, Foreigner, Moody Blues, Rainbow, Mountain and more. Many of these musicians came together in the studio to give these outstanding performances that showcase a different light to the songs of The Doors.


This new 16-song release begins with "L.A. Woman," highlighted by the guitar solo of Wishbone Ash's Ted Turner and the great keyboards of Patrick Moraz of the Moody Blues. The bar room rocker "Roadhouse Blues" is led by Leslie West's guitar and Rod Piazza's harmonica trading licks, while Vanilla Fudge's Mark Stein and Uriah Heep's Mick Box turns "Love Her Madly" into an early heavy metal blueprint. Edgar Winter turns "The Crystal Ship" into a haunted pirates tale and keyboardist Keith Emerson adds a four-minute solo to the beginning of "People Are Strange." Rainbow's Graham Bonnet leads the way to the spot-on remake of "The Soft Parade," before Todd Rundgren and Geoff Downes have fun serenading the listener along with Zoot Horn Rollo (Captain Beefheart) on the playful feel of "Alabama Song (Whiskey Bar)." The album closes with Pat Travers and Three Dog Night's Jimmy Greenspoon handling the duties of eleven-and-a-half minute epic "The End."

This album was released on June 24th through Cleopatra Records in association with Purple Pyramid Records. To find out more, please visit cleorecs.com
Posted by JP's Music Blog