CD Review: New East Coast Hardcore/Thrash Metal From Within The Ruins And Overkill 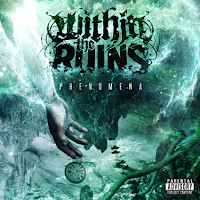 From Massachusetts comes the quickly released new album "Phenomena" from hardcore metal band Within The Ruins. Last year, the band released their first album with eOne Music entitled "Elite," which hit #2 on the Billboard Heatseekers album chart. Instead of taking their time to let that album simmer as they hit the road, Within The Ruins entered the studio right away to record this follow-up album which will be released on July 22nd through eOne Music. If you thought that all their energy and aggressive force was used up on their last album, then you'd be mistaken. They come out with guns ablazin' on "God Amongst Men" and "Clockwork" as guitarist Joe Cocchi skillfully picks his moments to open up his solos. The band mixes tempos on "Dark Monarch," before continuing the onslaught with the sheer force of "Sentinel." Within The Ruins showcase their amazing musicianship with the instrumentals "Ataxia III," and "Enigma" before closing with the howling vocals of "Ronin" and the powerful blast of "Calling Card."
Check out Within The Ruins this summer as part of The Summer Slaughter Tour. To find out more about the band and their new album "Phenomena," please visit their Facebook page at facebook.com/withintheruins. 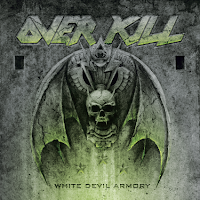 New Jersey metal band Overkill also show no signs of slowing down. The band will be releasing their seventeenth studio album entitled "White Devil Armory" on July 22nd through eOne Music. The band cracked the top 100 of the Billboard Album charts with their 2012 release "The Electric Age" and look to build upon that success with this latest release. Although if you ask founding member Bobby "Blitz" Ellsworth, he will tell you "We do this because we like it, first and foremost. We're not sitting there thinking about what's popular." The new eleven song album starts out with a short introduction piece before the furry of Overkill hits you like a ton of bricks with "Armorist." They continue to turn out great thrash metal music as with "Down To The Bone" and "Bitter Pill," while not straying to far into the mainstream of metal. This album does not disappoint with the perfect mix of hardcore metal ("Another Day To Die") and classic thrash ("In The Name") to please their fans.

Overkill will be heading out on their world tour in September. For a complete list of live dates and to find out more about their new album "White Devil Armory," please visit wreckingcrew.com/Ironbound/.
Posted by JP's Music Blog