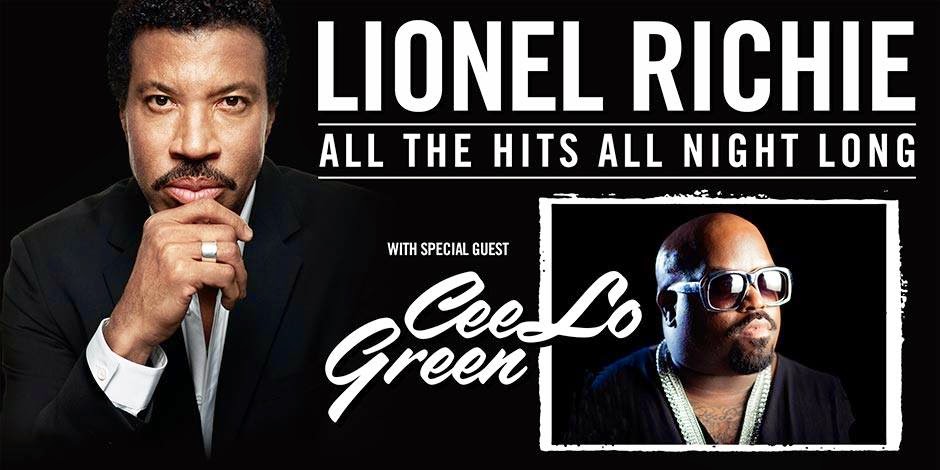 For over 45 years, Lionel Richie has been cranking out pop hits, first as a member of The Commodores then as a solo artist. He has sold over 100 million records worldwide and is considered one of the best selling music artists of all-time. Without a new album to promote, fans of Lionel Richie were in for a treat when he visited the Mohegan Sun arena Saturday night to perform a two-hour packed show of many of his biggest hit songs.

The night began promptly at 7:30 with opening act CeeLo Green performing a 45 minute set of originals and cover songs. He mixed in a few songs from his 2010 album "The Lady Killer" amongst cover songs by Sister Sledge, Rod Stewart and even the Violent Femmes. His opening set closed with his transformation into Gnarls Barkley for the song "Crazy" and then got everyone on their feet, singing the chorus of his biggest hit single "Forget You."

As the delay of headliner Lionel Richie taking the stage passed one hour, the crowd began to get restless, that was until Richie appeared center stage, then all was forgiven. He began the night with "All Around The World," the only song of the evening that was originally released after 1986. The rest of the night was a flashback to the seventies and eighties as Lionel Richie was one of the main performers of the soundtrack to these decades. Richie described the night as "karaoke on steroids" as every single person in the audience would sing along to their favorite hits, including the early upbeat songs "You Are" and "Running With The Night."

Lionel Richie was very personable with the audience, explaining the three different groups of "Lionel Richie fans." The ones that were there from the beginning as a fan of The Commodores, ones that became fans of his hit solo albums and the ones that just don't get why his music is so memorable. He broke-down the meaning behind the songs "Still," "Oh No" and "Stuck On You" to bring his three groups of fans closer together before getting everyone "Dancing On The Ceiling."

The night continued with a dip back to his seventies heyday with the Commodores' hits "Sail On," "Fancy Dancer," "Sweet Lady" and "Lady (You Bring Me Up)," which got all of the females on their feet dancing. The main set closed with the audience grooving to "Brick House" and singing along to "Hello," before letting their cares go for the huge eighties #1 single "All Night Long (All Night)."

With a roaring applause, Lionel Richie returned to the stage to perform a song he had written with the late Michael Jackson, explaining that it is still the perfect message for today. He began to sing "We Are The World" and is wasn't long before the entire audience joined in to sing the chorus as he closed the evening with a sincere "thank you" and left the stage to another standing ovation.

Lionel Richie's music has become so timeless that as long as their is love and heartache in the world, his music will have a significant meaning in our lives.

Setlist: All Around The World, Penny Lover, Easy, Ballerina Girl, You Are, Truly, Running With The Night, Still, Oh No, Stuck On You, Dancing On The Ceiling, Three Times A Lady, Sail On, Fancy Dancer, Sweet Love, Lady (You Bring Me Up), Just To Be Close To You, Endless Love, Say You Say Me, Brick House/Fire, Hello, All Night Long (All Night)
Encore: We Are The World
Posted by JP's Music Blog