The latest set of releases from Audio Fidelity features two classic rock cult classics in need of a tune-up. The Rush album "Presto" is considered by fans to be the pinnacle of the band's late 1980's output, while seventies prog-rock band Renaissance's concept album "Scheherazade and Other Stories" is arguable the strongest of their career. 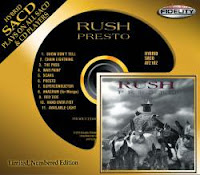 Rush's album "Presto" was originally released in 1989 and shows the band beginning to return to a more "rock" sound.  Neil Peart's drums become more dominate as in the hard rock opener "Show Don't Tell." The problem that fans have with this album is not the songs, but the way the recording sounds. The album always had a cold, tinny sound, unlike some of their early albums, but the new Audio Fidelity release looks to correct that problem and they do, to a point. The bass groove of "Chain Lightning" is more present and the drums of "The Pass" give the song a little more punch, but the most noticeable characteristic is the clarity of the instruments throughout the album. Alex Lifeson's acoustic guitar on "Presto" sounds so clear while his guitar riffs in "Superconductor" gives that song its hard rock energy. The entire album benefits from being remastered by Kevin Gray from Cohearent Audio and finally fits perfectly alongside the other Rush remasters released by Audio Fidelity. 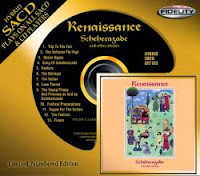 Now the prog-rock band Renaissance found mild success in the mid-seventies with their albums "Scheherazade and Other Stories" and "Novella," each breaking into the top 100 on the album charts. But, the album "Scheherazade and Other Stories" became a cult classic and established lead singer Anne Haslam as one of the pioneer women of progressive rock music. The album's theme and sound is the perfect candidate for Audio Fidelity's remastered release. The ten-plus minute opener "Trip To The Fair," appears to have a bigger dynamic range on this new release and the band's pop/rock output "The Vultures Fly High" has more of impact with the warmth of the instrumentation. The keyboards and orchestral arrangements the "Songs Of Scheherazade" come through with such clarity that the original release should be replaced by this version in every CD collection.
Both of these CDs were released in July and are available to order from audiofidelity.net.
Posted by JP's Music Blog