Concert Review: The Avett Brothers Make It A Special Night At The Oakdale Theatre 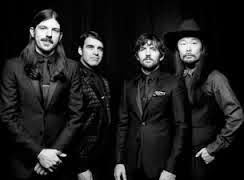 There are some concerts that you buy tickets for and wait all year to see. Then there are other shows that go to see because you like a certain band's album and wonder what they are like in a live setting. While The Avett Brothers are not a common, well-known band and have not had a hit single, their live shows have become a community of fans, old and new, uniting to experience a special, one-of-a-kind night with great folk, Americana, rock music. Last Friday night at the Toyota Presents the Oakdale Theatre become one of those special evenings when The Avett Brothers paid a visit to Connecticut.

The band's two hour set began shortly after 8pm when the 7-piece took the stage, beginning the night with Seth Avett taking the lead vocals on the mellow tone of "Spell Of Ambition." Things quickly picked up as The Avett Brothers became very animated performing the up-tempo songs "Live And Die" and "Traveling Song." The harmonies between brothers Seth and Scott Avett gave strength to songs "Laundry Room" and "Down With The Shine." The Avett Brothers are touring behind the new album "Magpie And The Dandelion," to which they would only perform a couple of songs from that album, "Another Is Waiting" and "Vanity." Most of the band's setlist relied on older songs to get the audience on their feet moving along to countrified folk rhythm of "Head Full Of Doubt/Road Full Of Promise" and "Nothing Short of Thankful."

Brothers Seth and Scott Avett each had their moment to shine in the spotlight as each performed solo. First Scott Avett took the stage with an acoustic guitar, performing the heartfelt ballad "Murder In The City," followed closer by brother Seth's storied lyrics of the "Ballad Of Love And Hate." Then the two joined voices for a brand new song, "Fisher Road" as all in attendance new this was a special night.

The evening continued with the fast-paced, clap-along chorus of "Kick Drum Heart," which seamlessly led into "Geraldine," before slowing things down for everyone to sing the fan-favorite "I And Love And You." The main set finished with the wonderful closing song "Life," which also closes the band's previous album 'The Carpenter."

After chants of "a-vet, a-vet," the band returned performing a few more songs, including their sweet performance of Ola Belle Reed's "I've Endured," followed by "The D Bag Rag." The night concluded with the band harmonizing through a cover of The Spaniels' "Goodnight, Sweetheart, Goodnight."

Long-time fans left the theatre with smiles on their faces, while newcomers became transformed to permanent fans of The Avett Brothers as they performed a special night for all to remember.