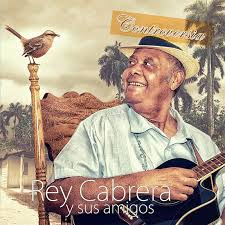 Cuban singer/guitarist Rey Cabrera is one of the few leaders of traditional Cuban style music called "son cubano" and one of the last to master the tres, a Cuban style guitar. He released his latest album "Controversia" on August 5th through Goldenlane Records in association with Cleopatra Records.

The new ten-song release carries the traditional Cuban vibe as the music places you in the center of the Caribbean. While you may not understand the lyrics, unless you can speak Spanish, the music and the flow of his vocals on "Mi Nina Mari" makes it catchy to the average listener. The Latin flair of "Le Canto Al Palenque" will have you moving your feet and shaking your hips as Cabrera is joined by Roberto Carrion, while the tango of "Cuando Nace El Sol" will put your mind at ease with Cabrera's skills with the tres. The jazz-like feel of "Canto A Bruselas, 10 Anos Despues" is refreshing as a Latin-lounge gem. The album finishes with a return to the island flavor of "El Fuiki Fuiki" as Rey Cabrera still sounds amazing at the age of  71. To find out more about the this latest release from Rey Cabrera, please visit cleorecs.com.
Posted by JP's Music Blog