On January 20th, Omnivore Recordings will resurrect the only two released studio albums from indie-rockers Jellyfish during their short existence. Within only five years, the band drew a very big cult following that still exists to this day. Once Omnivore Recordings released the two albums ("Bellybutton" and "Spilt Milk") on vinyl back in 2012, demand was high for the original music to be remastered. So, not only did Omnivore Recordings remaster the original albums, but they also added on a combined 51 bonus tracks, turning each album into a deluxe two-CD set. 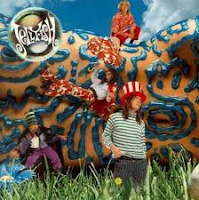 The bands debut album "Bellybutton" showcases the band's influences in a mixed bag, paying tribute to everyone from The Beatles, Queen, XTC, Badfinger and Cheap Trick. The album contained a number of singles like the contemporary pop of "That Is Why," the harder post-punk appeal of "The King Is Half-Undressed" and the mellow flow of "I Wanna Stay Home." Jellyfish tap into their Beatles influence on the earthy feel of "She Still Loves Him" and the psychedelic, unplugged "Bedspring Kiss" as both songs still sound timeless. The big single from the album "Baby's Coming Back" is still pop gold, but does sound slightly dated amongst the electronic hits on the charts today. The first disc is beefed up with ten bonus live tracks taken from numerous EPs, singles and fan club releases. The highlights are the fast-paced, guitar driven "Mr. Late," a spot-on cover of Wings' "Jet" and the grunge-like rock of "All I Want Is Everything." The second disc of the set contains 16 demos that Jellyfish recorded for their debut album. Nine of the songs would end up on the album with one ("Bye Bye Bye") appearing on their follow-up album. All of the songs have appeared on other Jellyfish releases, but are finally right at home next to the original album. 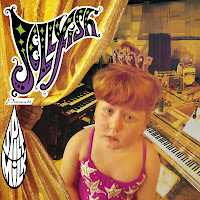 The band's second release "Spilt Milk" featured some line-up changes, but still kept that great barrier-free music, beginning with the harmonizing of "Hush," before heading into one of the popular singles from the album "Joining A Fan Club." Their pop-rock aspects were still present on this album as in "New Mistake," but with more complex layers to the music. The break-through single "The Ghost At Number One" was the only one to break the top 10 on the modern rock charts in 1993 and had more of that sound from their first album along with "Bye Bye Bye." The original twelve song album gets an additional eight bonus tracks consisting of demos that never appeared on the final album. Two of the bonus tracks ("Worthless Heart" and "Watchin' The Rain") are credited to Beatnik Beatch, which was the predecessor to Jellyfish. The second disc consists of 17-tracks, mostly made up of demos for the "Spilt Milk" album with a few gems hidden within including a cover of Harry Nilsson's "Think About Your Troubles." The disc closes with four live tracks and a special message to their fan club which was never officially released to the public until now.
Both of these new releases preserve the Jellyfish legacy and give fans new and old the proper deluxe versions of these album that they deserve. To find out more about these great new releases, please visit omnivorerecordings.com.
Posted by JP's Music Blog

I bought a boxed set about ten years or so ago that contained both albums and a boatload of bonus stuff. What's different on these?

Yes, I would also like to know what's the difference between the 10 years ago boxed set with lots of bonus tracks and these "new ones". Best

My impression from hearing the sample clips is that the biggest difference is 'dynamic range compression.' For some reason, all re-masters are being done this way nowadays. I guess its only so that you can hear all the notes through puny phone or tablet speakers. Sounds like poo through anything else. Web search 'The Loudness War.'

Not worth getting if you have the Fan Club box set IMHO...not that I don't love JF

If you already own the Jellyfish "Fan Club" box set which was released back in 2002, then you probably have everything that is on these new "deluxe editions" of "Bellybutton" and "Spilt Milk." The only difference would be in the "remastered" sound of the original album and the booklet containing an essay from music writer Ken Sharp and a track-by-track commentary by the band.