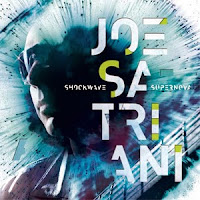 Guitarist extraordinaire Joe Satriani is preparing to release his new solo album entitled "Shockwave Supernova." It is Satriani's fifteenth solo release and it begins the next chapter of his amazing career. After releasing the massive, career-spanning box set last year, Satriani found a renewed inspiration to create new instrumental music and this latest album is one of his best.

Beginning with heavy rocking, progressive feel of the title song "Shockwave Supernova," you wouldn't think that this artist was a thirty year veteran of the music industry. The passion and emotion he displays in the opener reminds us of how good Satriani is a creating new musical journeys through his music. He works the fret board on the wildly energetic romp of "Crazy Joey," then strategically attacks the aggressive nature of "On Peregrine Wings" as the hard-rocking rhythm motors the song. Satriani showcases a tribute to the bluesmen of yesteryear with the classic sounding "San Francisco Blue," then slows the tempo down for the progressive jazz feel of "All Of My Life." It sounds as if his days with the supergroup Chickenfoot have rubbed off on some of his songwriting as in "Scarborough Stomp" and the album closer "Goodbye Supernova" as Satriani's amazing guitar playing fills in for the lead vocals. Joe Satriani will be hitting the road this fall with a tour of Europe. The new album will be released on July 24th through Legacy Recordings, to find out more about "Shockwave Supernova," please visit satriani.com. 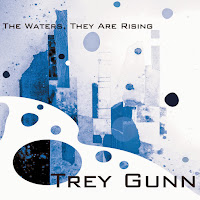 Former King Crimson guitarist Trey Gunn recently released his latest solo album "The Waters, They Are Rising." This is the first in a series of four releases dealing with different themes. The theme of this release is "water" as the music flows together and gives off an aquatic feel to the album's overall tone.
Beginning with a re-worked cover of Bob Dylan's "Not Dark Yet," you would hardly recognize the song. It was created for the film score to the movie "Every Beautiful Thing" and sung by Dylan Nicole Bandy as it sets the stage for the rest of the album. Gunn's new release also includes live versions of musical pieces he's performed from Peter Gabriel's "Here Come The Flood." The general feel of the music is gentle and fluent as you become relaxed with the sounds of "Three Days" and "Odra."  Gunn gets a little more exploratory with plucking the strings of "The Last Wave," before closing the album with the eight-minute, atmospheric build-up of "The First Return" also from the Sonya Lea film "Every Beautiful Thing." To find out more about this and other releases from guitarist Trey Gunn, please visit treygunn.com.
Posted by JP's Music Blog