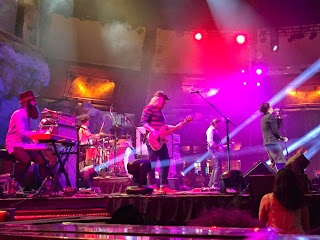 Let me start off by saying that if you never heard of the band Rival Sons, it is about time you check them out. Rival Sons are a California rock band that have sold out theaters and arenas all over Europe and have slowly built up a following in the U.S. the old-fashion way, by touring. The band recently returned to the States, after two months of touring in Europe, with a show Saturday night at the Wolf Den at the Mohegan Sun Arena. Only their second U.S. show of their "Million Mile Ride World Tour."

The night began precisely at 8pm with the band ripping into their latest single "Electric Man" from the band's 2014 album "Great Western Valkyrie." Lead singer Jay Buchanan was very animated at the microphone stand, screaming out the chorus to "Secret" and "You Want To" as he put his all into his performance. Guitarist Scott Holiday mesmerized the audience with his amazing guitar wizardry during extended solos of "Manifest Destiny Part 1" and "Tell Me Something."

After a quick 30-minute warm-up set, the band would sit down for a short four-song acoustic set, which really allowed their harmonies to shine during "The Man Who Wasn't There." Rival Sons turned the hard rock vibe of their song "Burn Down Los Angeles" into a swampy, New Orleans-style blues number, before finishing the set with the acoustic rocker "White Noise."

The band returned to their electric instruments to turn the energy back up to full blast with the hard rock of "Torture." The steady drive of bassist Dave Beste and drummer Mike Miley would motor through the song as touring keyboardist Todd Ogren-Brooks applied an extended solo to the song adrenaline-fueled rhythm. Their 90-minute set would close with "Get What's Coming," which featured some slick, slide-guitar provided by Holiday as singer Buchanan left all his energy on the stage.

Rival Sons returned to the stage once again for the quick, two-song encore of "Open My Eyes" and "Keep On Swinging." Sandwiched between the songs was a thunderous drum solo by Miley that proved why this rising young band needs to be heard. Especially if you are a fan of classic, British-blues based hard rock. The audience at the Wolf Den were treated to a special performance and everyone in attendance became bigger fans of Rivals Sons after witnessing that night.

Setlist: Electric Man, Good Luck, Secret, You Want To, Pressure And Time, Manifest Destiny Part 1, Nava, Burn Down Los Angeles, The Man Who Wasn't There, White Noise, Toture, Tell Me Something, Rich And The Poor, Where I've Been, Get What's Coming
Encore: Open My Eyes, Keep On Swinging
Posted by JP's Music Blog