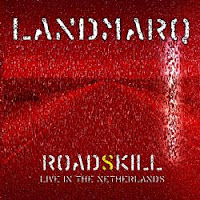 British progressive rock band Landmarq are celebrating their 25th anniversary with the release of their new live album titled "Roadskill: Live In The Netherlands." It was recorded during the band's last tour in 2013 and features eight of the band's greatest, most exploratory songs that will take you on a great journey of sounds. Led by the vocals of Tracy Hitchings, the band has never sounded better as their symphonic, progressive style plays perfectly in a live setting.

The new live album begins with some "Turbulence" as the song starts out with hard rocking opener, before slowing down to allow keyboardist Mike Varty to share the spotlight with Hitchings' vocals. Their is a mystical feel to the music of Landmarq as displayed in twelve-minute "Glowing," while "Prayer (Coming Home)" is a wonderful concise piece of inspirational music. The album closes with the eight-minute "Entertaining Angels" which is a great progressive rock song that floats along the same stream as later-day Pink Floyd.

Included with this CD is a live DVD recorded of the entire concert and also features interviews with the band. It was released at the beginning of June through Cherry Red Records. To find out more about Landmarq and their latest release "Roadskill: Live In The Netherlands," please visit their Facebook page at facebook.com/landmarqtheband.
Posted by JP's Music Blog