American pop singer Darlene Love has had a very successful music career that has lasted over fifty years. She began her career as a member of the girl-group, The Blossoms, before working alongside such legends as Elvis Presley, Sam Cooke, Tom Jones and The Beach Boys. The 1962 single "He's A Rebel" propelled her into the spotlight, where she stayed as a solo artist. Love left the music scene for almost ten years, before a chance conversation with E Street Band member Steven Van Zandt helped with her comeback to music in the mid-1980's. Darlene Love was inducted into the Rock 'n' Roll Hall of Fame in 2011. Fast forward to 2015 and once again Steven Van Zandt is the driving force behind the resurgence of Darlene Love and her music. She recently released a new album, "Introducing Darlene Love" through Van Zandt's label Wicked Cool, in association with Columbia Records. It is her first album of new material in over 15 years, it was produced by Steven Van Zandt and is definitely one of the most anticipated albums of the fall schedule.
The new fourteen-song release features songs written by some of the greatest musical performers all-time, including Bruce Springsteen, Elvis Costello, Joan Jett and even a couple penned by Van Zandt. The album begins with one of those original Van Zandt songs, "Among The Believers." It showcases the power of Darlene Love as a lead-singer with an equally powerful supporting cast as the song has a Gospel-feel to it. Love reverts back to her glory days with the classic girl group appeal of "Forbidden Nights," while Springsteen's influence floods "Night Closing In" as Love fits in perfectly with the E Street Band sound. She sings the words of Van Zandt with heart and soul in "Last Time," before closing with the wonderfully addictive gospel spell of "Jesus Is The Rock (That Keeps Me Rollin')." Darlene Love's tour schedule is packed through the end of the year. For a complete list of dates and to find out more about her new album "Introducing Darlene Love," please visit darleneloveworld.com. 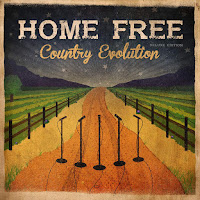 Rising country sensation Home Free recently released their third album in less than two years. The new release titled "Country Evolution" was available through Columbia Records on September 18th and it mixes together a handful of originals with some famous country covers. After winning NBC's "The Sing-Off: Season 4," there life has been a whirlwind of recording and performing. There debut album "Crazy Life" debuted in the "top 10" and their holiday album, "Full Of Cheer" was one of last year's best sellers of the season. They return with their sensational vocals, looking to capture more of that magic with "Country Evolution."
The new fourteen-song release begins with the original up-tempo, fun-filled "Summer In The Country." Their voices mesh together perfectly in "Good Ol' Country Harmony," before heading into their covers of Dolly Parton's "9 to 5" and the Oak Ridge Boys' "Elvira." The latter song also features some vocal help from the Oak Ridge Boys. Home Free pay tribute to one of the their favorite bands, Alabama with the "Alabama Sampler," then perform a spot on vocal version of the Eagles' "Seven Bridges Road." Country legend Charlie Daniels and You Tube sensation Taylor Davis lend a hand to energetic delivery of "The Devil Went Down To Georgia." The album finishes with a couple more original compositions, the pop feel of "California Country" and the short acapella glow of "Serenity." Home Free have a string of live dates the runs through the end of the year. For a complete list of shows and to find out more about their new album "Country Evolution," please visit homefreemusic.com.
Posted by JP's Music Blog

Thx for the good review! Many don't know that they're awesome musicians/some multi-,but
choose (the more challenging) a cappella! These very tall,uber-talented,dryly funny
guys are incredible, even better LIVE & they sound like a full band,like no other!! Hope to see them at the CMAS w/an orig. hit!..YOU TUBE: HOME FREE..[[Headphones turned up!!]]
.
"GOOD OL' COUNTRY HARMONY" -live debut!
"9 TO 5 ON 9/6/15 -live debut..awesome breakdown-live only!like you've NEVER heard!!
"ADAM RUPP 'DRUM' SOLO -insane!!!!!!!!(actually CAN play trumpet,bass,keys,drums)!! :)