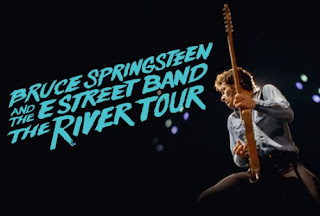 Back in December of 2015, a simple announcement was made that the iconic artist Bruce Springsteen and The E Street Band would be heading back out on tour. As soon as tickets went on sale, poof, they were gone. His live shows have become legendary, lasting over 3 hours and containing rare gems and classic covers and his visit to Hartford on February 10th was no different. Except this time, Bruce Springsteen and The E Street Band would perform the entire double-album “The River,” from front to back. This alone would be enough for the average Bruce Springsteen fan, but he would then continue like a man possessed, until he left everything he had on that stage.

This tour features a “scaled down” version of the E Street Band, as only nine members supported Springsteen’s wishes as he started the night off with appropriately titled “Meet Me In The City,” an outtake from “The River” album. Springsteen was every bit of the showman that you hear tales about. He ran back on forth, front to back on the stage during “Sherry Darling” and went out into the audience, slapping hands, posing for photos, reading signs during a blazing version of “Hungry Heart.” He even crowd surfed along the floor, turning the 66 year old veteran in a young kid again.

Springsteen would discuss the meanings behind songs like, “Independence Day” and “I Wanna Marry You.” He traded verses with the audience during the song, “The River,” before kicking it into high gear with the powerful “Cadillac Ranch” and “I’m A Rocker.” The only slow part of the evening was the string of ballads “Drive All Night” and “Wreck On The Highway,” which closed the first half of the show.

Springsteen and The E Street Band got a boost of energy, beginning the second half of the show with a request for “No Surrender” from a fan’s sign. Guitarist Stevie Van Zandt and Nils Lofgren pulled out some electrifying solos during “Cover Me” and “Because The Night,” respectively. After eight shows into the tour, Springsteen pulled out another first with their rare performance of “The River” album outtake, “Loose Ends,” before closing their set with an amazing delivery of “Thunder Road.”

The encore brought the excitement of the show to another level, beginning with the crowd favorite “Born To Run” as all of the house lights were turned on to show fans dancing in the aisles. A few lucky ladies from the audience were called up on stage to dance with Bruce during “Dancing In The Dark,” while saxophonist Jake Clemons and drummer Max Weinberg keep the juices flowing during the sing-along of “Rosalita (Come Out Tonight)” and “Bobby Jean.” After three hours and fifteen minutes, the night would end with a punk-like, rocking version of the Isley Brothers song, “Shout” as this party came to close.

At the beginning of the show, Bruce asked “Are you ready to be transformed?” I wasn’t sure what he meant. Could it have meant that after this performance you would become a bigger fan of Bruce Springsteen and The E Street Band? Or that you would remember an earlier time in your life when these songs meant something to you? Or that you would simply be taken over by the energy of the band and have no excuse, but have a great time at one of his shows? I’d like to think that everyone has their own answer, but I for one was “transformed” that night.

Setlist: Meet Me In The City, The Ties That Bind, Sherry Darling, Jackson Cage, Two Hearts, Independence Day, Hungry Heart, Out In The Street, Crush On You, You Can Look (But You Better Not Touch), I Wanna Marry You, The River, Point Blank, Cadillac Ranch, I’m A Rocker, Fade Away, Stolen Car, Ramrod, The Price You Pay, Drive All Night, Wreck On The Highway, No Surrender, Cover Me, She’s The One, Loose Ends, Because The Night, The Rising, Thunder Road
Encore: Born To Run, Dancing In The Dark, Rosalita (Come Out Tonight), Bobby Jean, Shout
Posted by JP's Music Blog