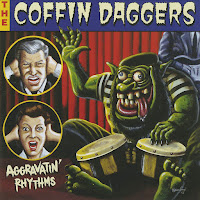 One of the east coast's premier instrumental surf guitar bands is The Coffin Daggers and they recently released their third full-length album titled "Aggravatin' Rhythms." It has been five years since their last album and 14 years since their 2002 debut album quietly entered the music scene. The band is bred from the '80's punk scene in New York as founding member Vikto Venom (Nausea) surrounded himself with some high caliber musicians to create a truly unique sound.
The new fourteen-song release begins with the organ/guitar duet of the title song "Aggravatin' Rhythms" as the music takes on a spooky, Adams Family-type feel. That classic, Dick Dale-sounding surf guitar makes it first appearance in "Instigator," while the music sneaks around with the eerie sounds of "The Sinister Urge." The Coffin Daggers return to that classic surf rhythm in "Uprising!" and "Wake Up Screaming" as Vikto's guitar keeps you on the edge of your set with his performance. They slow the tempo down for the big guitar strumming and pulsating beats of "Concussion," before closing the album with the quick-pace of "The Thing." To find out more about The Coffin Daggers and their latest release "Aggravatin' Rhythms," please visit coffindaggers.com. 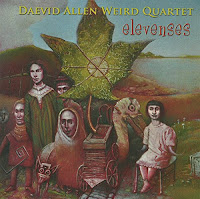 Legendary British musician Daevid Allen, known as a founding member of Soft Machine and GONG, released his last album with the Daevid Allen Weird Quartet. The new album titled "Elevenses" was released on February 12th through Purple Pyramid Records and features Allen's last recording before his death in March 2015. It is only the second album to be released by this quartet, but it reminds you how great Daevid Allen's compositions were and what sort of musical journey you were in for.
The new thirteen-song release begins with the psychedelic sounds of "Transloopthismessage," which leads into the classic sixties sounding "Imagicknation" that reminds us of the early recordings of The Soft Machine. The quick pace of the instrumental "The Latest Curfew Craze" shows that the Daevid Allen Weird Quartet still have a few tricks up their sleeve, while the looming sounds of "The Cold Stuffings Of November" tries to expand your mind with its pulsating rhythm. The band puts together an old school pop gems with "God's New Deal," before closing with the thunderous beats of "Killer Honey" and the controlled chaos of "Banana Construction." To find out more about this final release from the Daevid Allen Weird Quartet, please visit cleorecs.com.
Posted by JP's Music Blog