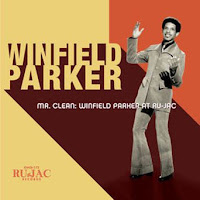 As the mid-1950's drew to a close, there wasn't a record label around that was owned by an African-American man, yet their music was all over the radio. In the early 1960's, Rufus Mitchell started Ru-Jac Records and their top talent was the soul singer Winfield Parker. Parker came from a small town in Maryland and began his musical profession as a saxophonist. It would be Rufus Mitchell who convinced Parker to become a solo artist and it would pay off with the hit singles "Mr. Clean" and "My Love." On March 25th, Omnivore Recordings will release "Mr. Clean: Winfield Parker At Ru-Jac," a collection of his singles packed with six previously unissued bonus tracks.

The new 23-song release begins with Winfield Parker's early recordings "My Love For You" and "On One Of These Mornings" recorded as Little Winfield Parker. He would perform the hits "I Love You Just The Same" and "Sweet Little Girl" along with The Shyndells Band, but his smooth vocals would shine through on the ballad "Wondering" and "Oh My Love." He had the perfect voice for the R&B grooves of "I Love You Just The Same" and "Funky Party," while "Mr. Clean" parts 1 & 2 showcased his full potential.

The six bonus tracks consist of a previously unheard take of "Nothin" as Winfield Parker shows how he swings on this classic sounding number. A couple of versions of "Go Away Playgirl" lead to an alternate take of the ballad "My Love For You." The set closes with two insightful takes of "My Love" that help show the development of the final well-known hit single. To find out more about the newly released "Mr. Clean: Winfield Parker At Ru-Jac," please visit omnivorerecordings.com.
Posted by JP's Music Blog