Almost every music critic agrees that The Beatles hit their creative peak with their 1967 album "Sgt. Peppers Lonely Hearts Club Band," but what about the two amazing albums that have lead to that crowning achievement in music. Without the albums "Rubber Soul" and "Revolver," there may not have been a "Sgt. Peppers" and now we get the inside scoop on this two iconic albums with two newly published books, "This Bird Has Flown: The Enduring Beauty Of Rubber Soul, Fifty Years On" and "Revolver: How The Beatles Reimagined Rock 'n' Roll." 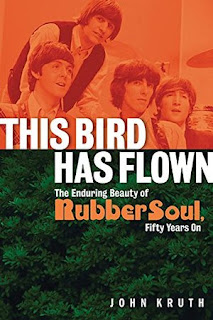 The album "Rubber Soul" was released in December 1965. It is considered the 5th "greatest album of all time" according to Rolling Stone magazine and topped the charts in the U.K. and the U.S. upon its release. This new book, "This Bird Has Flown," dives into the recording of the album by dedicating twenty of the book's twenty-five chapters each to a song that was originally recorded for this album. The book begins with the ever-rising popularity of The Beatles following their historic show at Shea Stadium and the success of their movies, "A Hard Days Night" and Help!" This album would be their first album to be recorded in a four week session with no distractions. This allowed The Beatles to examine the entire recording studio in order to expand their sound beyond the three-minute pop song. The book examines the hits like "Yesterday" and "In My Life" with a microscope, covering everything that was said and done in the studio during the recording of each song. Author John Kruth gathers every single bit of information he can and puts it together in such a way that you feel like you were part of The Beatles' inner circle of friends. Even the unreleased song "12-Bar Original" gets its own chapter to explore the meaning behind it's recording. The book also contains some color and black & white promotional photos of the band along with covers of the album and singles. To find out more about the newly published Beatles' book "This Bird Has Flown," please visit halleonardbooks.com. 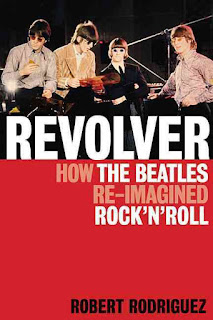 Following the success of "Rubber Soul," The Beatles returned to the studio to record their most experimental album to date, the eye-opening "Revolver." The newly published book that examines the recording of that album is titled "Revolver: How The Beatles Reimagined Rock 'n' Roll." Author Robert Rodriguez breaks the book down into three parts and only eight chapters which goes in depth into the recording of this magical album that showed what kind of songwriters and musicians The Beatles were. It's amazing in this day of age to see how quickly The Beatles recorded many of these classic songs and how quickly they were released to the public in hastily cobbled together compilation. These songs received their due when placed together in the proper order for the August 1966 release of "Revolver." Author Rodriguez explains how many different musical influences from Ravi Shankar to Bob Dylan helped The Beatles get creative, along with a little help of marijuana and LSD. The book also dives into the recordings of each song from the album with in depth details of the song's influence and arrangement. Robert Rodriguez finishes his latest book with a chapter that explains how this album opened many doors for other musicians, including The Beatles themselves leading up to their most iconic album "Sgt. Pepper's Lonely Hearts Club Band." To find out more about the newly published book, "Revolver: How The Beatles Reimagined Rock 'n' Roll," please visit halleonardbooks.com.
Posted by JP's Music Blog