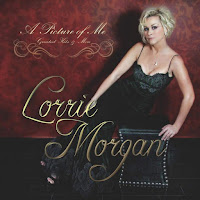 American country artist Lorrie Morgan recently released a new collection of her greatest hits singles and inspirational favorites titled "A Picture Of Me." She became the first female country artist to release three consecutive platinum selling albums, selling over six million albums worldwide. Her new sixteen-song release begins with the country-rock feel of her 1992 single, "Watch Me," which hit #2 on the country singles chart. She adds a slight country twang to her cover of The Beach Boys' "Don't Worry Baby," but her voice really excels on the ballad "Good As I Was To You," which is why Lorrie Morgan ranks up there with some of the all-time best female country artists. This new release includes a re-recorded version of her 1990 #1 single "Five Minutes" and her wonderful cover of the George Jones classic "Loving You Could Never Be Better." Also included is her big hit single here in the U.S. and north of the border, "What Part Of No" along with her version of Tammy Wynette's song "Take Me To Your World." The album finishes with the stunning ballad "Mirror, Mirror" and the quiet love song "Hopelessly Yours." Lorrie Morgan has some live dates sprinkled throughout the summer. For a complete list of shows and to find out more about her newly released greatest hits album "A Picture Of Me," please visit lorrie.com. 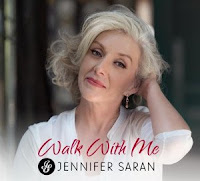 American adult-pop singer/songwriter Jennifer Saran is following up her 2015 Christmas album with a new release titled "Walk With Me." It features 18-songs produced by platinum recording artist Narada Michael Walden and released through his own label, Tarpan Records. The album begins with the upbeat, pop feel of "Let My Love Stand" and the eighties, R&B flavor of "Where Have You Been."  Jennifer's voice soars on the ballad "Walk With Me," before getting your body moving with the electronic dance beats of "Let's Get Away." The smooth, sultry delivery of "Wait For Me" and the modern pop of "Smooth Baby" showcases the many different sides of Jennifer's passion for music. The album closes with the delicately wonderful sounds of "Soar" and the plea of love for "You Are My Man." To find out more about Jennifer Saran and her latest release "Walk With Me," please visit jennifersaran.com.
Posted by JP's Music Blog