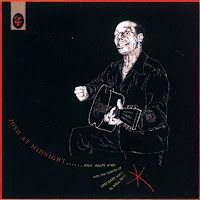 South Carolina blues artist Josh White is receiving his due recognition with the vinyl-only reissue of his 1956 seminal album "Josh At Midnight." White performed on Broadway, in film and radio and was the first African-American to give a White House Command Performance. He never received  the success and fame he deserved during his lifetime, but he was named by artists like Bob Dylan and Nat "King" Cole as an early influence.

The original album was recorded with a single microphone in a converted Manhattan church by Elecktra founder Jac Holzman. It features White, with only an acoustic guitar performing a dozen blues classics, including many public domain songs. The album begins with the traditional "St. James Infirmary" as White injects his emotions into his performance. White receives help from jazz bassist Al Hall and vocalist Sam Gary on the up-tempo swing of "Raise A Rukus" and the storied blues/folk of "Scandalize My Name." White sinks himself into the full-on blues during the six-minute delivery of "Jelly, Jelly!" and tells the story of "One Meat Ball" with such power and grace. The album closes with the quick two-minute hop of "Peter" and the slow-jaunt of "Takin' Names" as White's vocals seem a little too clean for the blues. To find out more about the new reissue of Josh White's "Josh At Midnight," please visit horizonrecords.net.
Posted by JP's Music Blog