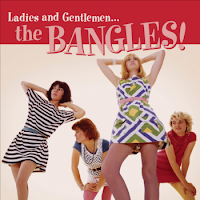 The Bangles had some of the biggest hits in the eighties with "Walk Like An Egyptian" and "Eternal Flame," but the band started out as a post-punk outfit featuring Susanna Hoffs and the Peterson sisters, Debbi and Vicki. Their original name was The Bangs, but quickly added the -les to the end of their name before issuing their first EP in 1982. Now, Omnivore Recordings revisits that early period, along with many of their demos and some live songs from their eighties heyday with the new release "Ladies And Gentlemen...The Bangles."

Collected here are 16-tracks, beginning back in 1981 with a trio of tracks from The Bangs that have long been out of print. Their youthful energy is felt in the surf-style instrumental "Bitchen Summer/Speedway" and "Getting Out Of Hand." The Bangles first self-titled EP is represented here and showcases their talents and you can hear their rise to stardom is songs like "The Real World" and "Want You." Also included on this release are some of their earliest demo recordings of cover songs like Warren Zevon's "Outside Chance" and Paul Revere And The Raiders' "Steppin' Out." The Bangles energy is definitely heard in their live performance of the song "7 & 7 Is." I only wish their were more live songs on this release, but the closing jingle "No Mag Commercial" and "The Rock & Roll Alternative Program Theme Song" are great additions to have in this set. To find out more about "Ladies and Gentlemen...The Bangles," please visit omnivorerecordings.com.
Posted by JP's Music Blog