CD/DVD Review: The Traveling Wilburys Go Digital With Their Collection 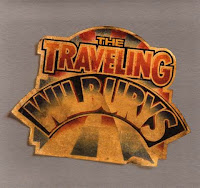 The super group known as The Traveling Wilburys were the ultimate batch of songwriters, featuring George Harrison, Bob Dylan, Tom Petty, Roy Orbison and Jeff Lynne. As they came together under the guidance of George Harrison in 1988, the band was only planning on producing one song to use as a B-side to Harrison's single "This Is Love." The song "Handle With Care" was so good that the record executives wanted an entire album from The Traveling Wilburys. Within ten days, "Volume 1" was recorded at Bob Dylan's home studio. It featured ten songs that combined the efforts of everyone involved. The album was released in late 1988 and has since gone 3x platinum in the U.S.

The group quickly reformed to re-create the magic with a follow-up album, but before writing began for the second album, iconic singer Roy Orbison had passed away. So the four remaining members turned the next album, titled "Volume 3" into a tribute to Orbison. While the album did not have the same impact as it's predecessor, it still reached number 11 on the Billboard album charts upon it's release in 1990 and has also reached platinum status in the U.S.

During the late-1990's into mid-2000, The Traveling Wilburys albums were unavailable as they went out of print and instead became collectors items. Then in 2007, Rhino Entertainment, in association with the Wilbury Record Company, re-issued the two albums in a 3-disc box set which included a DVD. It was the first time in almost a decade that The Traveling Wilburys' albums were available on CD and on vinyl. Both albums included two bonus tracks that were recorded by the band, but were left off the original albums as they were used for B-sides and for compilations. The DVD that was included featured a 25-minute documentary on "The True History Of The Traveling Wilburys." It contained home videos of the group rehearing and recording at Bob Dylan's home studio in California and George Harrison's studio in London. Plus it included five music videos for their hit singles. The box set debuted at #9 on the Billboard album charts, then quickly went into hiatus after only a few years.

On June 10th, the Wilbury Record Co. along with the Concord Bicycle Music re-issued the set on CD and for the first time digitally in all the major markets. It just proves that these albums were very special and continue to be timeless, as the next generation can appreciate what happened during that special short period of time back in 1988. To find out more about this newly released version of "The Traveling Wilburys Collection," please visit travelingwilburys.com.
Posted by JP's Music Blog