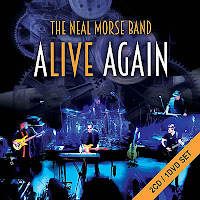 American multi-instrumentalist Neal Morse gained recognition as a founding member of the popular progressive rock bands Spock's Beard and Transatlantic. He became a born again Christian in 2002 and has released a string of solo Christian rock albums along with a string of progressive rock albums with The Neal Morse Band. On August 5th, The Neal Morse Band will be releasing a new live album titled "Alive Again." It will be released as a 2CD/DVD set and in Blu-ray form. Teaming up with Morse on this live album is drummer Mike Portnoy, Randy George on bass, Eric Gillette on guitar, and Bill Hubauer on keyboards to create an exciting journey through the band's ultimate live sound.

The show begins with a couple of song's from The Neal Morse Band's latest studio album "The Grand Experiment" as a renewed energy is heard in the live delivery of the new music. They expand upon one of Spock's Beard's deep tracks, "Harm's Way" as the band delivers the 14-minute musical beautifully. Morse does include some of his Christian rock song in his live show with the masterpieces "The Creation" and "Into The Fire" and then the band takes you on a sonic journey with 30-plus minute version of "Alive Again." The Neal Morse Band finish the show with the uplifting sonic delivery of "Reunion" and "King Jesus" as the audience joins in on the show closer. To find out more about The Neal Morse Band and their new live album "Alive Again," please visit radiantrecords.com.
Posted by JP's Music Blog