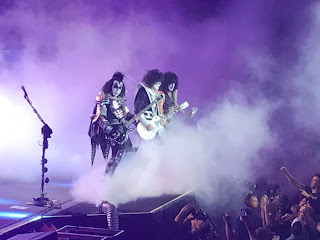 During the month of October, Mohegan Sun has been celebrating their 20th anniversary. The casino has invited special guests to perform all month long and the festivities continued Saturday night with a performance from rock legends Kiss. Also, being so close to Halloween, everywhere you turned fans had their faces painted as one of the members of the band. Some even going as far as wearing the band's full battle armor, snapping pre-show photos with fellow fans. This night would be extra special for me, bringing my 11-year old daughter to her first Kiss concert and what a night she was in for.

As the arena goes dark and with the curtain drawn, a deep bass line rang through the speakers. Then those historic rock words that all Kiss fans know were spoken, "You wanted the best, you got the best! The hottest band in the world, Kiss!" As the curtain drops, the masters of theater concerts are lowered from the ceiling getting the excitement flowing with the fire and explosions of "Detroit Rock City." Bassist/singer Gene Simmons posed for the cameras between his verses of "Deuce," before lead singer/guitarist Paul Stanley addressed the sold-out audience.

Kiss has always fed off the energy of their fans and Stanley got the crowd going with a screaming match between the two halves of the arena. Vintage clips played on the giant video screen behind drummer Eric Singer during their performance of "Do You Love Me." Simmons' alter persona, The Demon, begins his bass solo with the Halloweenish effect of spitting blood to the roaring response from fans. I can only image what my daughter may have thought, since no-one in today's pop world comes close to that level of shock performance.

The demonic tones of "God Of Thunder" found Simmons flying to the raptures, 50 feet above the stage to sing his iconic hymn. Guitarist Tommy Thayer steps up to the microphone to sing the lead vocals of "Shock Me," which lead to his rocket firing solo. Kiss steps into their non-makeup wearing era only once for "Lick It Up," before diving back into "War Machine" highlighted by the fire-breathing demon.

Invites from the audience got Paul Stanley flying across the arena to perform "Love Gun" from a smaller stage at the back of the arena. Then Kiss' epic live number "Black Diamond" closed out the 90-minute set. Eric Singer left his drum set to sing the ballad "Beth," before Paul Stanley addressed the audience with the politics of today. The mention of Kiss supporting U.S. vets received a huge applause, while the ringing of "boos" followed his speech about politicians.

Everyone stood for the "Star Spangled Banner," preceded by the "Pledge Of Allegiance." Kiss closed the night with the rock and roll nation anthem, "Rock And Roll All Nite," which finished the night off as one big party. As confetti and fireworks filled the air, smiles were on everyone's face as even the youngest of fans sang along to this rock and roll pledge. A night with Kiss has become a rite of passage that fans have passed down from generation to generation and my daughter is now a fan for life, witnessing one of the best live bands of all time.