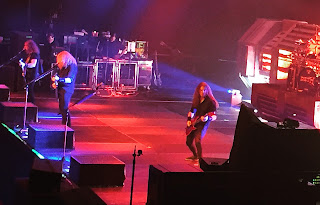 The Mohegan Sun Resort & Casino is in the midst of celebrating their 20th anniversary this month. To help celebrate, the casino has invited some of the biggest names in pop music (Bruno Mars), country (Tim McGraw) and rock (Kiss) to perform and Thursday night brought in some of the greatest names in heavy metal. Thrash metal legends Megadeth are almost finished wrapping up their “Dystopia” U.S. tour with one of their last three stops at the Mohegan Sun Arena. They also brought along some friends to help celebrate.

The night began with a couple of quick 20 minute sets from newcomers Butcher Babies and the newly reformed Metal Church, featuring original guitarist Kurdt Vanderhoof and long-time lead singer Mike Howe. Carla Harvey and Heidi Shepard, lead singers of the Butcher Babies used their screams and sexuality to grab the attention of audience early as their music was strikingly swift. Then, Metal Church return to their eighties-metal heyday for the hard rock anthems “Fake Healer” and “Beyond The Black.”

Next up was the west-coast, punk-like thrash metal of Suicidal Tendencies. They are touring behind a new album, “World Gone Mad,” their first in three years. They started their forty-minute set with the MTV staple “You Can’t Bring Me Down” as fans were exerting all their energy in the mosh pits that broke out on the floor. Suicidal Tendencies would stick close to their early days with songs like “War Inside My Head” and “Subliminal,” much to the delight of long-time fans, since they are the longest-tenured band in the line-up. Shouts of “S” “T” would close out their set with the 1988 anthem “Pledge Your Allegiance.”

An orchestra-like keyboard instrumental signaled the arrival of Viking metal band Amon Amarth with their opener “Twilight Of The Thunder God.” Their stage set-up features the front of a Viking ship as lead singer Johan Hegg went between the two sides of the stage, growling through the vocals of “The Pursuit Of Vikings.” Amon Amarth are also touring behind the release of a new album, “Jomsviking,” which was released back in March as they performed the lead single from the album “First Kill” to a roaring applause from fans. Their nearly hour-long set finished with another new track, “Raise Your Horns” as all the members of the band drank from their horn goblets and demanding a heavy metal battle cry for  “Guardians Of Asgaard.”

As the lights went out one final time at 9:30pm, Megadeth took the stage, beginning with the instrumental “Hanger 18” as guitarists Dave Mustaine and Kiko Loureiro traded solos. Megadeth is touring behind their new top 5 album “Dystopia” as they scattered new songs throughout their set. The audience welcomed the new tracks like “The Threat Is Real” and “Conquer Or Die!” with overwhelming delight, seeing their idols still creating some of the best music of their career. The quick pace of “Wake Up Dead” got the mosh pit moving in overdrive and enticed many to surf the crowd. The fan favorites “Sweating Bullets” and “Post American World” got everyone banging their heads and pumping their fists to the song’s thunderous rhythms. Dave Mustaine dedicated “Tornado Of Souls” to former Megadeth drummer, Nick Menza, who died earlier this year of an apparent heart attack. The band closed their set with the one-two knockout punch of “Symphony Of Destruction” and “Peace Sells” as all in attendance were singing along to these classic thrash metal hymns. Their ninety-minute set closed with the final rush of energy for the epic delivery of “Holy Wars…The Punishment Due.”

As Mohegan Sun continue their 20th anniversary celebration, Thursday night was dedicated to heavy metal as fans gave all they had to their idols and also discovered some new music that can carry on the thrash metal legacy