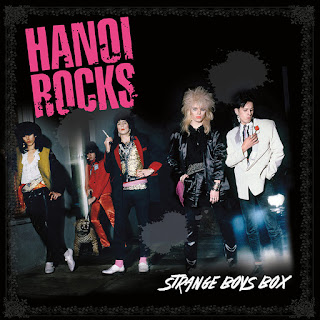 Finnish rock band Hanoi Rocks were prime and ready for the hair metal mania of the eighties. Their songs were slick, their look was stylish and the music was contagious. They sold over 10 millions albums worldwide between 1982 and 2002 and Cleopatra Records is celebrating the 35th anniversary of the release of their first album with a five-CD box set title "Strange Boys Box." It features the first four studio albums from Hanoi Rocks and their popular 1983 live album "All Those Wasted Years."

The studio albums included in this set feature "Bangkok Shocks Saigon Shakes, Hanoi Rocks" "Oriental Beat," "Self Destruction Blues" and "Back To Mystery City." Their sound early on had a polished post-punk feel as displayed on the first album with "Stop Cryin" and "First Timer." The single "Tragedy" became a hit in their home country of Finland and got them recognized in Japan, where Hanoi Rocks would sell the majority of their albums.

The glam, punk band started developing their own sound on their second release "Oriental Beat." Songs like "Motorvatin'," "Teenangels Outsiders" and "M.C. Baby" showcased their edgier rock side and opened up their audience to the U.K. with their punk-like energy. They followed with their third release titled "Self-Destruction Blues," which was the last to feature drummer Gyp Casino. The album was made up of compilation singles and b-sides. They matured their sound with the addition of horns on "Love's An Injection" and the harmonizing of "Cafe Avenue" showcases how the band has grown after only a few albums. They let lose their bluesier side with the title song and inspired Guns N Roses to record a cover of "Beer And A Cigarette" as bassist Duff McKagan was a fan of the band.

Hanoi Rocks released "Back To Mystery City" in May of 1983 and it was the first album to feature new drummer, Razzle. His energy would take the band to new heights as they became a more hard rock/heavy metal band with songs like "Beating Gets Faster" and "Mental Beat." The explosive guitar riff of "Back To Mystery City" would turn this number into one of Hanoi Rocks most popular songs.

The box set finishes with Hanoi Rocks' first live album "All Those Wasted Years," which was recorded at the Marquee Club one year before the untimely death of drummer Razzle. A home video of the show was also released and displays the full force of the band in a live setting. Lead singer Michael Monroe pours all his energy and emotions into originals like "Oriental Beat" and "Until I Get You." The band rocks with the punk-like delivery of "Malibu Beach Nightmare" and the wildly addictive "Taxi Driver." While the album feels like a greatest hits release, Hanoi Rocks pays tribute to their idols, closing the show with covers by Alice Cooper ("Under My Wheels"), The Stooges ("I Feel Alright") and the popularized Yardbirds version of "Train Kept A-Rollin'." To find out more about the new Hanoi Rocks box set "Strange Boys Box," please visit cleorecs.com.
Posted by JP's Music Blog