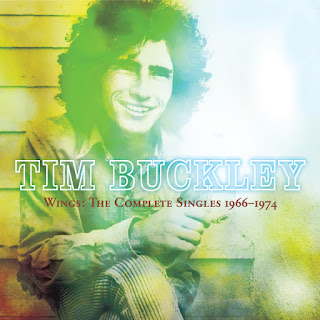 American singer/songwriter Tim Buckley (father of Jeff Buckley) began his career in 1966 with his self-titled debut folk-rock album. As his popularity grew, so did his musical style as he incorporated elements of jazz, soul and psychedelic rock into his music. Tragedy struck less than ten years later when Buckley was found dead of a heroin overdose at age 28.


To celebrate the 50th anniversary of his debut album and single "Wings," Omnivore Recordings is releasing a new Tim Buckley compilation titled "Wings: The Complete Singles 1966-1974." It features 21-songs, containing every A-side and B-side from Buckley's entire career. Beginning with "Wings," you are reminded of the bright, gentle vocals that Buckley delivered in these early days. The set includes his unissued, full-blown sixties psychedelic-rock single "Once Upon A Time," which also features the gentle Americana, folk-rock of "Give Me Your Key," which has never been released.


The lyrics of "Morning Glory" and "Once I Was" showcases the beauty in Tim Buckley's songwriting, while the blues of "So Lonely" displays the growth in his music. As the music landscape of seventies approached, Buckley's sound became more rock oriented infused with soul as in "Nighthawkin'" and "Quicksand." The compilation closes with funk-fueled "Wanda Lu" and the R&B-flavor of "Who Could Deny You." To find out more about the new Tim Buckley compilation "Wings: The Complete Singles 1966-1974," please visit omnivorerecordings.com.
Posted by JP's Music Blog