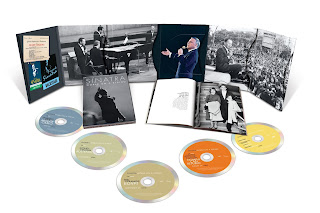 Continuing the year-long 100th birthday celebration of the late, great Frank Sinatra, Universal Music in association with Frank Sinatra Enterprises released "World On A String." This new 4CD/DVD box set was made available globally on October 21st and features over 4 hours of previously unreleased live recordings from Sinatra. It showcases live performances from Frank Sinatra as he performed shows in Italy, Australia, Egypt and the Dominican Republic. Each of the four CDs cover a different decade of live performances from Sinatra's extensive career.


The set begins with Frank Sinatra performing live at the Sporting Club in Monte Carlo in 1958. The sixteen-song set showcases a younger Frank Sinatra looking to win the crowd over with his classic renditions of songs like "Come Fly With Me" and "Moonlight In Vermont." It is great discovering another live performance from this crooner, hungry for the success he dreamed up, which would appear a decade later. The first disc closes with nine tracks taken from the 1953 RAI Radio Club recorded in Italy. Many of the spoken words segments are in Italian as Sinatra tries to get in touch with his Sicilian roots as much as possible.


The second disc is where we find Frank Sinatra in his prime performing at the Sydney Stadium in Australia in 1961. The audience hangs on to his every word as songs like "Young At Heart" and "My Funny Valentine" draw big applause from the audience. The stories and stellar delivery of "One For My Baby (And One More For The Road)" lead up to the Sinatra classic "Lady Is A Tramp," which has become a signature song of Sinatra's since the early sixties.


The third disc finds Frank Sinatra visiting the Pyramids in Egypt in 1979. He seems to have become more of a comedian, giving his fans an all around performance by joking at every opportunity. Sinatra breaks down the barriers between performer and audience as he works his way into the heart of fans. He praises the work of George Harrison with he rendition of "Something" and breezes through "Strangers In The Night." He closes the show with his signature one-two punch of "New York, New York" and "My Way," done in the style as only Frank Sinatra knows how.


The final CD in the set focuses on Sinatra's performance at the Altos De Chevon, La Romana, Dominican Republic in 1982. He sounds strong and powerful as he takes control of the orchestra and the audience right from the opening notes of "I've Got The World On A String." He gives his all to his fans as displayed in "My Kind Of Town" and works on his perfection of "I've Got You Under My Skin." His acoustic rendition of "Send In The Clown" is quite emotional and he also performs the rare Brazilian song "Quiet Nights of Quiet Stars." The Buddy Rich Band do an amazing job at the show, including the showstopper, "New York, New York."


The accompanying DVD features a black and white live show filmed in Hibiya Park, Japan in 1962. It features Sinatra in a coliseum like setting as he tries to loosen up the tight Japanese audience. Also included are the short documentaries of  "Frank Sinatra With All God's Children" as he tours Europe in support of the ill children and Sinatra's visit to Israel. The DVD also includes a dozen commercials that Sinatra made with the Perugina candy company in 1962. To find out more about this latest, much-welcomed addition to the Frank Sinatra catalog, please visit www.sinatra.com.
Posted by JP's Music Blog