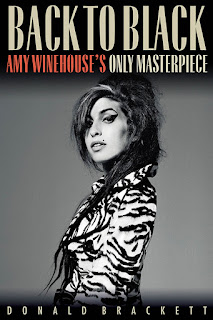 Vocalist Amy Winehouse created one of the best album's of the century. The release of "Back To Black" kicked off a revolution of jazz-induced female vocals that hasn't controlled the airwaves since the girl groups of the sixties. To celebrate the tenth anniversary of her album, author Donald Brackett digs into the recording of this monumental album in his new book "Back To Black: Amy Winehouse's Only Masterpiece."

The first few chapters lay the ground work for Winehouse's success as her debut solo album "Frank" only made a blimp on the U.K. music scene. The book helps explain how inspirational Sharon Jones and her sound was to what would be Amy Winehouse's sophomore album. Winehouse and producer Mark Ronson aimed to re-create Phil Spector's "Wall of Sound" as sixties diva Ronnie Spector saw a younger version of herself in Winehouse. The use of The Dap Kings as Amy's backing band was key to the sound of the "Back To Black" album.

The book explains how Ronson would take Amy's lyrics and turn them into retro masterpieces. Brackett uses the example of her hit single "Rehab," as it took Winehouse about five minutes to write the lyrics as a sort of joke song and Mark Ronson about five months to give the song it's style and addictiveness. As the success of the album grew around the world, Winehouse tried to prepare for what was to come in the form of tours, but she never expected and onslaught of scheduling she had to conquer.

Her image was just as important as her sound, but critics were quick to discourage her reputation as shows would be cancelled due to exhaustion When she did perform, she looked frail on stage, but she always delivered one of the best shows, as her voice and ability to win the crowd over would trump everything else.

One entire chapter covers the music videos created for seven of the album's eleven tracks as Amy was a natural in front of the camera. Another chapter discusses the recordings of each of the songs from the album. It also includes the outtakes that did not make the final cut of the album, but has since been released as B-sides and on a deluxe version of the album. Each song lists its credits, along with its legacy as how the song has lived on past it's containment on the "Back To Black" album.

The book closes with the question of whether or not Winehouse should be considered a musical legend as she was on the verge of leading the new vocal revolution. Author Donald Brackett has dug deeper than anybody else into the hectic life during the recording and promoting of one of the most important, iconic albums in music history. To find out more about his new book "Back To Black: Amy Winehouse's Only Masterpiece," please visit facebook.com/backtoblackbook.
Posted by JP's Music Blog