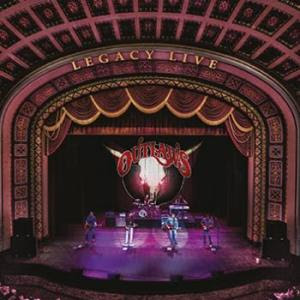 The history of southern/country rock band The Outlaws goes back almost five decades as they topped the country music charts in 1975 with their single "There Goes Another Love Song." The band is also well-known for their nearly ten-minute rocker "Green Grass And High Tides," which was also featured in the video game "Rock Band." Their latest release is the 2CD live album titled "Legacy Live" and became available on November 18th through the Steamhammer/SPV label.

The new twenty-song release touches upon every aspect of their storied career, beginning with the ever-popular "There Goes Another Love Song" and the electrifying rocker "Hurry Sundown." Their voices are strong and memorable on the up-tempo harmonies of "Hidin' Out In Tennessee" and they bring together the classic country sway of "Girl From Ohio" as their sound is as timeless as ever. The Outlaws can still jam as they push "Grey Ghost" past the 11-minute mark, showcasing the amazing musicianship in the band. The progressive build-up of "So Long" and the southern blues/rock flair of "Prisoner" have The Outlaws covering every aspect of the country/rock genre. They also deliver music from their most recent studio album in the form of "It's About Pride," before finishing the show with a fourteen-minute jam of "Green Grass And High Tides" and their masterful delivery of "(Ghost) Riders In The Sky."

The Outlaws still perform over a 150 shows a year, with a couple more lined-up in Florida to close out the year. To find out more about their new live album "Legacy Live," please visit outlawsmusic.com.
Posted by JP's Music Blog