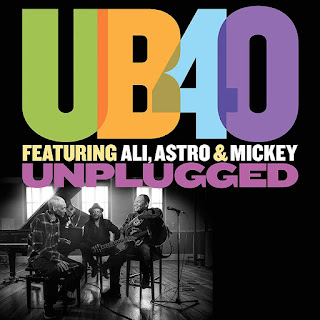 British band, UB40 conquered the U.S. and U.K. charts throughout the eighties, culminating in 1993 with their #1 charting album "Promises And Lies." UB40's biggest selling singles were cover songs as they added a reggae vibe to Neil Diamond's "Red Red Wine" and Elvis Presley's "(I Can't Help) Falling In Love With You." They released their last full-length album in 2014 and are ready to remind fans of their music with a newly recorded compilation of their hits titled "Unplugged." The new album was released on December 2nd through Universal Music and features the founding members of UB40 converting many of their classic tunes into a quieter acoustic setting.

The new 16-song release begins with a couple of well-known covers including Lord Creator's "Kingston Town" and "Red Red Wine," which features more island flair. Lead singer Ali Campbell pours his emotions into "Many Rivers To Cross" and fellow British artist Pato Banton lends a hand to the new groove of "Baby Come Back." UB40 pay tribute to Prince with a ska-version of "Purple Rain" and Campbell's daughter helps him out on the duet of "I Got You Babe." Some other great covers that appear on this new release are the Chi-Lites' "Homely Girl," Winton Groovy's "Please Don't Make Me Cry" and Eric Donaldson's "Cherry Oh Baby." The album finishes with the re-recording of "Tyler" from the band's first album and the uplifting reggae groove of "That's Supposed To Hurt." To find out more about UB40 and their latest release "Unplugged," please visit ub40.org.
Posted by JP's Music Blog