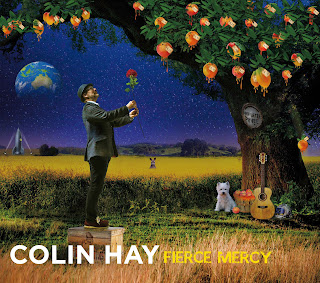 Singer/songwriter/actor Colin Hay might be best known as the lead singer of the Australian pop/rock band, Men At Work. He recently became a U.S. citizen in 2016 and is preparing to release his 13th solo album titled "Fierce Mercy." It will be available on March 3rd through Compass Records and deals with many personal subject matters including love and loss.

The new 13-song release begins with the wonderful, Americana-feel of "Come Tumblin' Down" as some of Hay's best songwriting appears on this album. He digs deep into his soul for "Secret Love" as his words express exactly what is being felt by the uplifting orchestral music. He strums away "The Best Of Me" as Hay's seems to have found the perfect mix between words and music on this heartfelt ballad. The amazing harmonizing on "The Last To Know" gives strength to his words as Colin Hay deals with a subject of urgency on this new release. The album gets very personable with the loss of "Two Friends" and the emotional poem "She Was The Love Of Mine," which was written for his mother, who passed away three years ago. The three bonus songs featured on the CD are the up-tempo pop tones of "I'm Inside Outside In," the island sway of "Blue Bay Moon" and the gentle rock swing of "Love Don't Mean Enough."

Colin Hay is currently on tour, promoting his new release, which runs into April and he is also completing a documentary film about his career titled "Waiting For My Real Life." For a complete list of dates and to find out more about his new album "Fierce Mercy," please visit colinhay.com.
Posted by JP's Music Blog