CD Review: Guitarist/Singer Steve Hackett Is Getting Ready To Signal "The Night Siren" 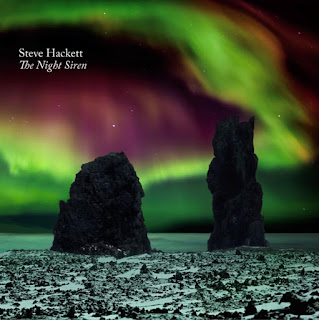 Legendary guitarist Steve Hackett is preparing to release his new studio album titled "The Night Siren" on March 24th. Hackett may be best known for his work with Genesis in the seventies. He was also a founding member of the guitar super-group GTR and has influenced a number of guitarists like Eddie Van Halen and Alex Lifeson. Hackett is also preparing to hit the road with a new live show titled "Genesis Revisited with Classic Hackett." He begins with a quick 13-date U.S. tour which runs through the month of February into early March, before heading over to Europe for three months. Steve Hackett's new live show will celebrate the 40th anniversary of the Genesis album "Wind And Wuthering."
His new eleven-song studio album begins with the seven-minute introduction of "Behind The Smoke" as your journey through the mind of Steve Hackett begins. The music has a grand orchestral feel as Hackett's amazing guitar solos just glide over the top. The album has a very worldly sound as in "Martian Sea," which is due to his band being compiled from different regions of the world. He brings in a classic, progressive rock feel to the seven-minute escape of "Fifty Miles From The North Pole." Hackett continues to amaze us with his talents during the wildly, intense instrumental "El Nino" and with the flamenco guitar wizardry of "Anything But Love." Hackett sounds most like his old Genesis days during the waltz of "Inca Terra" and on the heavy, progressive rock of "In Another Life." His new album closes with the uplifting sounds of "West To East" and the gentle sweeping guitar sounds of "The Gift."
For a complete list of tour dates and to find more about Steve Hackett and his latest studio album "The Night Siren," please visit hackettsongs.com.
Posted by JP's Music Blog

So was it any good?! Curious review.

The guitar work was amazing. I have not really followed his solo career other than when he performs some classic Genesis material, so some of the music on this album was a bit different than what I expected from him, but I did enjoy it more I listened to it. The album is also being release on Blu-ray audio with a 5.1 surround sound version of the album, which should really bring the music to life.

Then why comment on a musical style you admittedly know little about?
Do some research! Wasted my time.

EXACTLY Duke1947...If you know the mans music, you know he enjoys many styles and puts his stamp on them. From what I have read fans will be once again amazed and pleased , just as we were with Wolflight. The more that one listens to this man ( and Kudos to Roger for his incredible contributions both on and off the floor) the more the music is appreciated.

I've followed Steve's career since his first North American tour with Genesis and the plethora of solo studio and live work he has given us. The new album has a track available on iTunes right now and if this is any indication of what the new album holds, we should be in for another fantastic musical journey. I'm excited to hear the entire album!