Vinyl Review: Megaforce Records Boxes Up The "Kings" Of Anthrax Into Singles 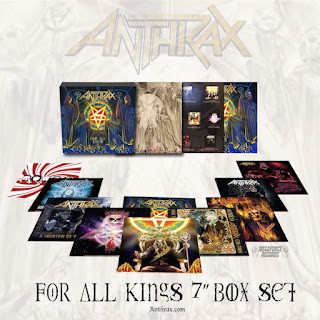 Legendary heavy metal band Anthrax are back out on the road with two months of tour dates in Europe, before returning to the U.S. for another two months of dates with Killswitch Engage. In the meantime, Anthrax has unveiled their own brand of beer titled "Wardance," which is brewed at New York's Butternuts Beer & Ale Brewery and will be available at the end of March. Anthrax are also preparing a new vinyl box set that will make your mouth drool with delight.

On March 24, Megaforce Records will release the "For All Kings 7-inch Vinyl, Limited Edition Box Set." It will include 10, 7-inch singles representing the full "For All Kings" album with previously unreleased demos, the Japan-only bonus track and two, brand new cover songs. This was something that Anthrax has always wanted to do to their albums and they worked very closely with Megaforce Records to get everything just right.

For a complete review of the original "For All Kings" album, please check out my review here (jpsmusicblog.blogspot.com). Now, on to the amazing bonus tracks, beginning with the Japan-only bonus track "Vice Of The People." The song carries a great, chugging rhythm that excels during the chorus and showcases the band's modern thrash metal sound. The two additional cover songs may seem like odd choices from a heavy metal band, but Anthrax turn The White Stripes' "Black Math" into a 3-minute, fun guitar romp that actually has them sounding more like their early days. The other cover song is Kansas' "Carry On," which showcases the band's diversity for playing many other kinds of rock music, while paying tribute to one of their favorite bands.

The set includes demos of six of the songs from the "For All Kings" album. They feature raw, instrumental versions of the songs "Breathing Lightning," "Monster At The End," Suzerain," "Zero Tolerance," "Blood Eagle Wings" and "Defend Avenge," whiche gives fans a glimpse into the creation of these amazing songs. They sound very polish and nearly complete versions of each of the songs. For a complete list of live dates and to find out more about the new "For All Kings, 7-inch Vinyl Box Set," please visit anthrax.com.
Posted by JP's Music Blog