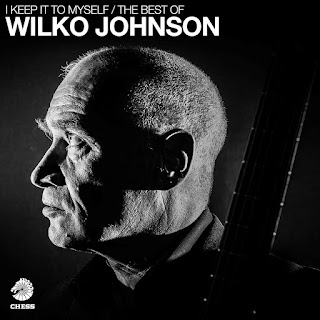 English singer/songwriter/guitarist Wilko Johnson has had a quiet 40 year career in music. He was a member of the British blues band Dr. Feelgood for a few years, before going solo in 1978. He released his last album in 2014, a collaboration with The Who's Roger Daltrey, which hit #3 on the U.K. charts. Now through the Chess label, Wilko Johnson is releasing a 2CD set titled "I Keep It To Myself - The Best Of Wilko Johnson." It features 25 tracks recorded between 2008 and 2012, which includes re-workings of some Dr Feelgood favorites, as well as songs from throughout his solo career.

The new two-disc set begins with new versions of the Dr Feelgood singles "Roxette" and "She Does It Right." He delivers a punk-like energy on "I Keep It To Myself" and produces some undeniable pop tones with "Ice On The Motorway" as Johnson showcases his guitar skills. Wilko Johnson gives off a reggae vibe on "Dr Dupree," before returning to his punk roots with "Living In The Heart Of Love." He keeps the energy of the original Dr Feelgood version of "Twenty Yards Behind," then displays the big, fat guitar riff of "The Hook," before finishing up with the six-minute blues rocker "When I'm Gone" and the British, new wave, post-punk rawness of "I Really Love Your Rock 'n' Roll." To find out more about Wilko Johnson and his new compilation "I Keep It To Myself - The Best Of Wilko Johnson," please visit wilkojohnson.com.
Posted by JP's Music Blog