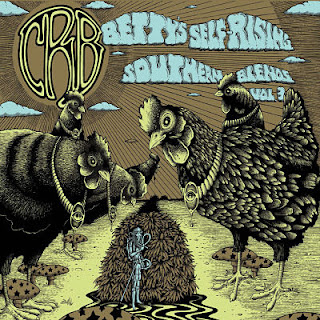 Back in 2013, the band entrusted the work of Betty Cantor-Jackson to record their live shows in San Francisco for a live album. Betty was a former record producer for the Grateful Dead, so she knew exactly how to record this jam band in a live setting and thus the "Betty's Blends" live series was born. The Chris Robinson Brotherhood are preparing to release their third volume in the series on May 5th, through Silver Arrow Records. The new release titled "Betty's Blends, Vol. 3: Self Rising, Southern Blends" captures the work of the band during their fall run of live shows along the southern east coast in 2015. The set will be released on vinyl and CD.

The new release begins with the Black Crowes original "I Ain't Hiding" and jamming blues cover of Slim Harpo's "Got Love." The CRB dive right into their spacey, country original "Clear Blue Sky & The Good Doctor" as the boys sound more comfortable with their own material as they look to experiment more on some of the album's cover songs like "I'm A Hog For You" and "Get Out My Life Woman." The CRB open up their sound on the 14-plus minute musical journey of "Ride," before closing their new release with the slow sway of "Girl I Love You" and a sonically charged version of Bob Dylan's "She Belongs To Me."

The Chris Robinson Brotherhood are currently on tour through the end of May. For a complete list of live dates and to find out more about their new live album "Betty's Blends, Vol. 3: Self-Rising, Southern Blends," please visit chrisrobinsonbrotherhood.com.
Posted by JP's Music Blog